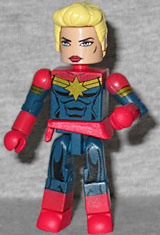 In the land of Arcadia, the premier superteam is A-Force, and one of its most powerful members is Captain Marvel, with her flight, strength and energy projection.

Captain Marvel is wearing her new red-and-blue costume, the one where the colors are opposite of her namesake. The star on her chest is golden, as are the stripes that reach over and go around the outside of her shoulders. She has a red sash, like the previous Carol, but it's a new mold. No energy blasts, though. Probably because that part of the budget went elsewhere.

The figure is packaged in the tray with her short blonde hair blowing about freely. Which is cool, but it's not her only look. To accommodate that, the set includes her battle helmet! Since it was clearly going to have to be a new piece, they went all-out, sculpting the armored panels on the sides as well as the mohawk poking out the top.

When the original Thor was deemed unworthy, a new warrior 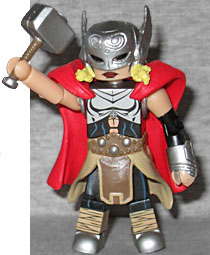 was chosen to wield Mjolnir. Her identity a mystery, the new Thor survived the formation of Battleworld.

Was her identity still a mystery when Secret Wars started? I really don't remember. It's known now. Though the hammer and cape come from a previous Thor, her helmet, belt/skirt, and the bracer on her left arm are new pieces. The wraps on her shins are only painted on the front and outsides of the legs, not the interiors or the back. Her breastplate and stomach are painted on the normal Minimate chest, and if you remove her helmet, you'll see a somewhat haggard-looking face. The set also includes a one-footed flight stand that is perfectly suited to both characters.