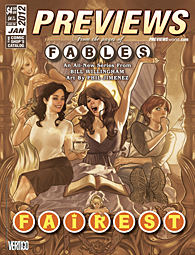 The next series of Halo figures are on page 222 - a bunch of boring green armor, and at least one new mold, a guy in a dress white uniform.

Also on page 222, another black and white set of Walking Dead figures - Rick and Michone.

Diamond Select has toys for Alice: Madness returns on page 384: a Cheshire Cat, a card soldier and two versions of Alice herself.

Page 387 has a listing for a Marvel Select Avengers figure, but NO information about what it is. Mystery item!

Mezco is offering a 14" Thundercats Mumm-Ra. Why 14"? Why not the same size as their Lion-O?

The 4" Venture Brothers figures are promoted on page 390 - they're not dead yet!

Spread between pages 392 and 393, you'll find Mez-Itz based on The Dark Knight, including 6" figures, 2" figures and even vehicles.

Marvel Legends and Marvel Universe are both available on page 399.

The same page has toys based on Men in Black 3, and they continue over to page 400.

Continue to page 403 for Star Wars vintage figures, including at least one character that's never had a toy before.

2 Responses to Flippin' through Previews - January '12