Natasha Romanoff reunites with a group of spies from her past to stop a lethal force.

No surprise this Black Widow movie toyline would have a Black Widow in it - but considering the number of 6" Natashas they've already made, it is a little surprising that this one gets a new mold. Her costume is grey and black, which is different from all the previous ones, so just that difference alone probably would have helped hide any re-use. Her Widow's Sting bracelets are separate pieces slid onto the arms, with one side of them larger than the other. She's got a belt with holsters hanging down to her thighs, and a harness around her shoulders to hold her backpack.

The likeness is not as good as we've seen in the past - Infinity War Black Widow remains the standard. It's terrific from certain angles, and it definitely features Scarlett Johansson's distinctly off-center mouth, but most of the time when you look at the figure, it just looks like a generic face, like the Winter Soldier Black Widow. 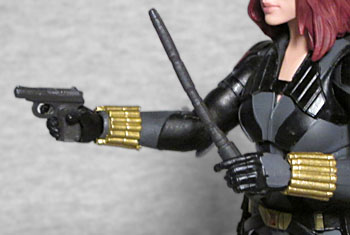 Her articulation is standard ML stuff: ankles, knees, thighs, hips, chest, wrists, elbows, shoulders, and head. Her accessories include two small pistols that store in the holsters very well, and her two battle sticks that poke up out of the backpack. There's also a pair of alternate fists, when you don't want her holding anything.

This series' Build-A-Figure is Crimson Dynamo, and Black Widow has the left leg.

We don't often talk about Marvel Legends packaging, because it's always the same curving box for everything, just with different colors - red for Spider-Man, yellow for X-Men, etc. The Black Widow toys are a stylish black, white, and red, suitably, but instead of photos of the actors or the toys, they get really cool graphic images of the character. Natasha's is one of the best, obviously, since she fits the colors perfectly. 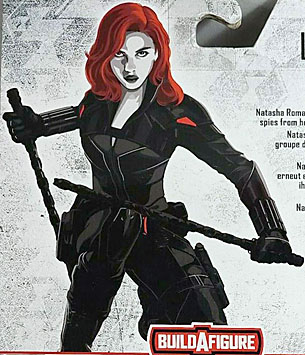