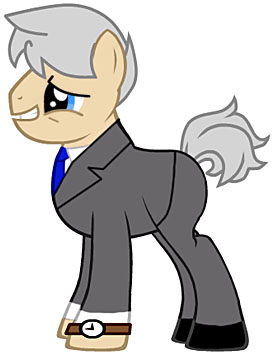 Former President Bill Clinton appeared on NPR's Wait Wait... Don't Tell Me!, an irreverent weekly news program to talk about his upcoming CGI America meeting. At the end of his segment, he played the "Not My Job" game, in which a celebrity guest is asked three multiple-choice questions about something entirely unrelated to their field of expertise.

Bill Clinton was asked questions about My Little Pony.

To hear the whole segment or read a complete transcript, visit NPR's site. We're just sharing the part that relates to toys (or at least, to a cartoon based on toys).

PETER SAGAL, host: Well, Mr. President, we are delighted to have you with us, but we do want to play a game with you and today we're calling...

President BILL CLINTON: This is the part where you make me look like a fool, right?

SAGAL: The farthest thing from our minds. This is the part where you...

President CLINTON: I'm going to create a job at my CGI America; somebody will volunteer to be my tutor for a year after this is over.

SAGAL: All right, we have invited you here to play a game we're calling?

SAGAL: So you're a former president, you're a Rhodes scholar, you're famously well informed. What could we be sure that an accomplished person like you would know nothing about? And then the answer came to us: the TV show My Little Pony: Friendship is Magic.

SAGAL: Answer three questions, or answer two out of three questions about the wonderful world of My Little Pony: Friendship is Magic and you win our prize for one of our listeners, Carl's voice on their home answering machine. Carl, who is President Clinton playing for?

KASELL: The President is playing for Dave Parks of Chico, California.

SAGAL: So here we go. You ready to do this? One of the current My Little Ponies is Rarity. That is her name, Rarity. What is her particular enthusiasm? A: she loves her little line of toys called My Even Tinier Ponies. B: giving other ponies makeovers. Or C: eating paste.

SAGAL: Yes, giving other ponies makeovers. Yes, that is in fact Rarity's...

SAGAL: ...big enthusiasm. Very fashion conscious, our Rarity is. All right, when ponies in Equestria discover their true talents in life, they earn something: what? A tattoo on their flank, known as a cutie mark. B: a title, such as Fluttershy the Inventive. Or C: the right to mate.

SAGAL: A. You're going to go for A, a tattoo known as the cutie mark? Oh, you're right, sir.

Ms. JESSI KLEIN (Comedienne): I have to say I think it's probably fair to say this is the highest stake situation President Clinton has ever been in.

SAGAL: I think so.

Ms. KLEIN: In his entire life.

SAGAL: And he's doing so well.

SAGAL: All right, well let's see if you can be perfect. The ponies' most powerful enemy is which of these? A: Krastos the Glue Maker.

President CLINTON: If he's not, he ought to be.

SAGAL: Yeah, I know. B: the evil pony Nightmare Moon. Or C: the cynical grownup, Chester.

SAGAL: B, you're going to go for the evil pony Nightmare Moon. You're right, Mr. President.

SAGAL: Nightmare Moon is released in the opening episode from the prison where she's been held for a thousand years, and is only defeated by the ponies working together, and then they have a party.

SAGAL: Carl, how did President Clinton do on our quiz?

KASELL: He had three correct answers. So the President wins for Dave Parks.

SAGAL: Another victory for you, sir. You've done so much. Been elected twice, governor of Arkansas, the youngest governor ever. How does this stack up?

President CLINTON: It's right up there.

This entry was posted in Hasbro, podcasts and tagged MLP. Bookmark the permalink.