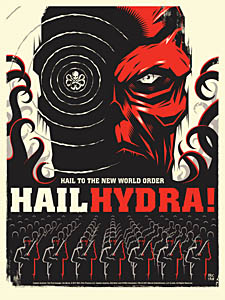 And so we reach the end of our theme week! The movie opens tomorrow, 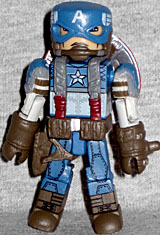 so hopefully we've helped you pass the time. This set is the star of the show, in that it features both the hero and his foe in one box, so it's most likely to be picked up by casual fans. Cap is in the full movie costume, with a mix of painted and sculpted pieces to duplicate his rather anachronistic complex costume. The boots and pants are just painted with details, though he does have a working holster on his right hip. The gloves are new (the left one has a peg to attach his shield, a la the Captain America Through the Ages set), and so is his fancy webgear. Finally, the upper arms are new pieces, with the padding sculpted on. Oddly, the white section around his stomach ends at the ribs - is that a real feature of the movie costume, or did AA cheap out on the paint apps?

Captain America is wearing his helmet, of course, and it's a new mold. The seams running over the top and around the eyes are sculpted, and the chinstrap is completely detailed. The wings on the side and the A on the forehead are just painted, as they should be. The face beneath doesn't look much like Chris Evans, but the set includes some dirty blonde hair if you want it.

Cap's accessories include his shield and a gun to fit in the holster. The shield is actually a new mold, with detailing on the reverse: it's painted silver, with dark brown straps and what appear to be rivets. The shield can plug onto the figure's arm, or the back of his webgear. It's slightly warped from being held in the plastic tray since it was packaged in China, which throws off the look.

If you were doing a movie about World War II Captain America, you'd have to be stupid not to make Red Skull the villain. Even the terrible '80s movie got that right. There are actually two Red Skull Minimates available, but since one of them is in that single-boxed counter display that no stores actually carry, you'll never see it. This one is wearing his long black trenchcoat, which, yes, looks very intimidating, but it also ruins his articulation. That is exceedingly lame. And because they put so much money into tooling his coat (and his other accessories), there's no alternate costume painted on the body beneath.

Red Skull is played by Hugo Weaving, who's had a Minimate before. A lot more detail on this face, though. He has molded hair on the top of his head, but it's worth noting at this point that the face is mis-aligned on the head - on every figure. 100% of Red Skulls have been painted incorrectly, leaving him with a really off-kilter hairline. Here's a hint: the point of the hair is supposed to be right above his nose, not off to the side.

Yeesh. On the plus side, this isn't actually his face: it's a mask, so maybe it's meant to look bad on purpose. Yeah, right. Anyway, pull the face off, and you'll see the ruddy headbones that give him his name. It's shockingly red when you first see it. Like Dave Attell once said, "'dog dick' red." The bare skull looks a little too small on the body, due to the combo of the bulk added by his coat, and the need for the mask to fit over the head.

In addition to the mask, Red Skull comes with a pistol. It's a tiny, Minimate-ized Luger, the perfect accessory for a German soldier. And the cute thing is, the little angled piece at the bottom of the gun makes it look like he's holding it with his pinky extended. Because he's classy.

This set is going to sell, no matter what. It's got the hero, it's got the villain... what more could you want? Well, honestly you could want a better Red Skull. He's "okay," but the fact that he might as well be unarticulated below the shoulders is highly disappointing, to say nothing of the fact that 60% of his head is painted on crookedly. Given the choice, get the rarer "Hydra Uniform" Red Skull.