Thor is a major Marvel character, so it's very surprising it took 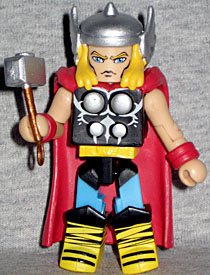 until Series 16 to get him his first Minimate. This is his classic Kirby-designed costume: black, with silver discs on the chest. The chest and cape are one combined piece that slips over the chest, so Art Asylum took the opportunity to make the discs raised elements, rather than just painted. The muscles on the chest are just painted, though, so he maintains that nice "Minimate simplicity." The wristbands are separate pieces that slip onto the arms, and he's got a new belt with his traditional winged T symbol on it. The boots are new pieces, to better accommodate those flared knees, and they've been painted to look like the uneven wraps they were always drawn as. His hair and helmet are one piece, but his face seems to be extra small, so it can be seen between those golden locks. He comes with a dinky little Mjolnir, too. 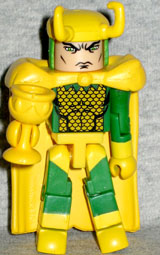 Loki is Thor's treacherous stepbrother, the reason the Avengers formed in the first place, and the second figure in this set. He, too, wears his Kirby costume, which is all green tights and gold lamé. The chest is painted with scales, to simulate his chainmail or whatever, but the gloves, boots and underwear are all just plain yellow. Oh well, at least it matches his giant cape. You can take that off, if you like - he still looks fine without it. He gets new headgear, with a ponytail out the back and big hooked horns on the front. Okay, non-ponytail: his hair is black, not yellow, so that's just some sort of fauxnytail. You know, like a fauxhawk, but different. Loki's only accessory is a yellow goblet or chalice, for those times he's helping out during Communion.

This set was the one with a variant in Series 16, and the variant 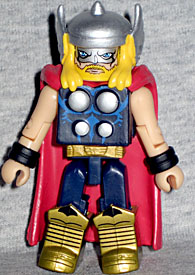 is officially "Bearded Thor." That doesn't really tell you anything though, does it? For a time, Thor was bonded to an architect named Eric Masterson, rather than to Dr. Donald Blake. When Thor was banished from Earth for seemingly slaying Loki, Masterson was left with the ability to transform into Thor, but kept his own knowledge and personality. He also got a new costume, which is what this figure shows. Amazingly, this is the first time this costume has ever been made into a toy. It uses the same add-on pieces, but everything's darker. The wristbands are black, the belt and boots are gold, and the boots have a different paint layout to honor the alternate design. He's painted with a beard (duh! Hence the name!) and a silver mask over his eyes, as he had at the time. And yes, he carries the same Mjolnir.

Until very recently, this set was the only way to get a Loki Minimate, but Thor has had several alternate choices. The Eric Masterson Thor, meanwhile, is the variant (yet again) in the just-solicited Series 42. If you have this set, you don't need that one, but similarly, with that on the way, you don't need to pay through the nose for this old release. There are other Thors, there will soon be another Eric Masterson... but if you want a classic Loki, this is still the only way to get him.