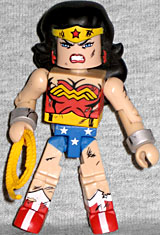 Releasing a "battle damaged" version of a character always seems like a cop-out: you've already released your main character, so you paint a few scratches on, and release them again. On the plus side, it puts a main character back on shelves without being a straight re-release. For instance, we alreay had a Wonder Woman in Series 2, and the only differences between that figure and this one are paint apps. She's got the same hair, the same bracelets and the same golden lasso. Thin black lines represent scrapes and bruises on her limbs, and there are a few (painted) tears in the costume. And boy, does her new face look angry! 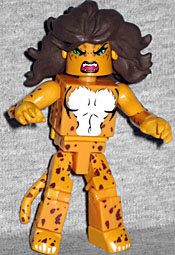 Cheetah is a classic Wonder Woman villain, and definitely the biggest selling point of this set. This is the "nude" Cheetah Mattel was afraid to release, so she's molded from a golden poppy colored plastic, then painted with crisp brown spots all over her body. There's a white patch on her chest, and small white toenails that are hard to see unless you're looking for them. She's got green eyes and a frightening snarl on her lips. The hair is a unique piece, flowing wildly around her head, and it looks perfect for the character. She has clawed hands (ones we've seen a lot of now, but I think she was the first to get them) and a tail that attaches to a thin strip at her waist.

Battle Damaged Wonder Woman is only a must-have if you didn't get the Series 2 version with Ares, but if you did get that one, rest assured that there are enough differences between the two that if you want this set just for Cheetah, you won't feel like you're getting saddled with a duplicate Diana.