Rustin's Spoils of the Week #34

You know what? I'm on an airplane right now and totally devoid of witty introductions. In the stead, here is an excerpt from the song currently playing on my iPod. I can stand the sight of worms, and look at microscopic germs, but technicolor pachyderms is really to much for me. I am not the type to faint, when things are odd or things are quaint, but seeing things you know there ain't, can certainly give you an awful fright - what a sight! Chase 'em away, chase 'em away - Pink Elephants on Parade!" 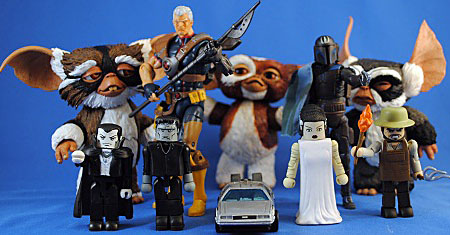 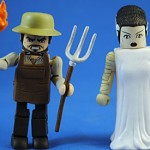 FINALLY! A totally exclusive figure for the Toys R Us line of Universal Monsters! Of course, in saddest fashion it's packed with a figure from a boxset, but hey - at least we're getting it! The whole UMM line plan is really confusing to me, it's like they actively strategized a way to sell as few products as possible - why buy the TRU sets if you're getting the boxsets and vice versa. It's surprising especially in light of how awesomely they planned out the Real Ghostbusters line running simultaneously! At any rate this is a pretty solid set. The Bride is a good figure, with a new dress piece which is actually about an eighth of an inch longer than the legs but fortunately it blocks the view of those dangling tootsies. The Villager is a pretty cool new figure, with an all new apron piece as well as torch and pitchfork! The hat/hair piece is odd though. The hat is conspicuously bland and rides quite awkwardly high on the head. The figure is a great addition to the collection though and I certainly hope we get a lot more! Yet it's kind of weird, if they'll do a generic Villager why not missing characters from the box sets like Dr. Praetorius, Fritz, and so on? It's a kind of a bummer that the Bride doesn't have an alternate Bandaged headpiece or that her body isn't painted in bandages so that we could have a different look for the now obligatory double-dipping... Still a good set nonetheless. 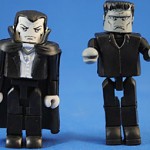 The token TRU exclusive set that is more of an obligation than an exciting addition to the collection. It's cool to get black-&-white variants of all the major monsters and will make a great display once we get at least one more pair. Dracula is a cool figure with new tuxedo/cape torso piece and a new hair piece. I'm surprised actually at how much I like this guy, he works quite well in the Minimate format. Frankenstein('s Monster) is a relatively simple figure. I think that's a new coat piece and his head is a solid sculpt with a more pronounced brow ridge - while normally I hate sculpted heads this works fine. A cool touch is a little ring around the neck that has two tabs, one of each side, to simulate the neck-bolts! The bummer though is that the assembly of the figure really only works with the Neck-Bolts being under the coat piece which pretty much renders them pointless. 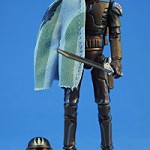 Cashing in on a cash-in on a popular character? In Star Wars!? No way! Rather than just letting Boba Fett remain as mysterious as possible the SW-iverse has to dig in to the Mandalorian background and mythos and give more exposition to fill out a character who we loved because we knew nothing about him! Seriously, lets make a series about the town where The Man With No Name grew up, so that we can better understand him and see a bunch of town folk in the same hat and poncho as he wears - oh and his real name is Terry Papagiorgio. Soapbox aside, that's what Clone Wars is fun for, just playing around in the sandbox. Lucas already used it as a litter box so lets just keep doing the best we can with whats left. This is a decent figure but clearly the basis for re-use, which was done almost immediately. He comes with a soft goods (boo) half-cape, a helmet, rocket pack, two cool handguns and a "dark saber," cause Mandalorian's aren't cool enough already, they need Black Lightsabers? Yeesh. A fun addition to the CW display, but getting a natural pose is tricky with the balljointed hips and mid-torso. 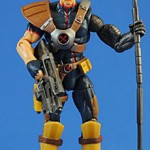 Wow, I actually found a Cable!? While I really wanted baby Hope, getting this figure at retail is a good enough trade off for me. He's got a really nice sculpt and if he isn't all new then he's pretty close. I'm quite pleased that Marvel Universe is finally folding in better proportions and articulation! Cable also gets three accessories, and they're all pretty cool. Being an X-Peripheral-Team novice I didn't realize he carried a staff (I'd only ever seen him with guns) so I guess that makes Magog an even more pointed parody. Sadly he can't hold the staff all that well, his hands being wider for guns and the staff being slimmer for looks, but you can still make it work. While it looks like he can, he can not double-hand the rifle, which is a bummer. A cool figure and a welcome addition! 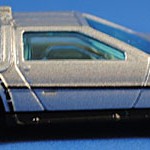 After the debacle what is the SDCC 2011 Hot Wheels Time Machine you'd think I'd steer clear of this, but you know what - I am powerless against my severe passion for Back to the Future and it was only $1.09! Now I see why there are so many Hot Wheels collectors - it's so much cheaper than action figures! This a decent little thing, with more metal parts than I expected (for instance the plutonium housing and cooling vents). The paint is pretty simple and straight forward, which does honestly make me appreciate the SDCC version a bit more, but the better paint isn't really worth 35 times the price. Conversely though it is a pretty detailed sculpt, especially considering the size. 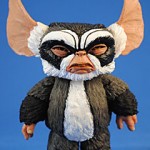 At last! My most anticipated line of 2011 has landed and is in my grubby little hands! George is one of the more sinister of the evil Mogwai (with the exception of Gizmo, is there any other kind?) which is captured excellently in the head sculpt. What a sour face! I was worried about him having such narrow eyelids, as to remove the "fun" of the articulated eyes, but it works out just fine. For the most part the paint is good, especially on the head, but the body has some bleed lines. As per the norm on these guys pretty much every joint is a balljoint, but none of them offer a lot of motion range. 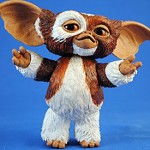 The Big G arrives is standard form. All of the Mogwai have little plastic tabs inserted with the eye-posing-ball on the back of the head in order to keep the eyes fixed in place. Since I had some trouble with the Convention Giz, I left the tab in on this one just to have one fixed-gaze figure. I had a lot of trouble finding a Giz with good paint. The heads are all generally fine, but there is a ton of bleed between the dark and white furs, and it shows the worst on Gizmo's big white belly. Part of me can conceive this messy application is meant to suggested overlapping shades of fur and other such attempts at realism but it just comes across as pretty sloppy. It's too bad because I desperately want this line to be a hit but at $12 apiece and such poor paint QC I can foresee a lot of people holding back. Frowny face. 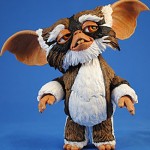 Lenny gets the distinction of being the one Mogwai what gets a different body type. The torso is slightly modified by a sort of "fur cone" extending the neck up about half an inch or so. It's quite a nice way to differentiate him from the crowd, beyond the other more obvious features (head and paint). The neck extension also gives this guy the widest range of head motion of the line (at least so far). I've got to take a moment and be totally honest with you - the $11.99 price tag is steep for these guys. At that price, the small size and lack of accessories is really palpable, especially considering the high level of parts re-use. At the least I wish they would have included one of the fur balls that came with the original Gremlins Gizmo as a sort of "baby Mogwai."

This entry was posted in Art Asylum, DST, Hasbro, Marvel, Mattel, NECA, Rustin's Spoils of the Week, TRU and tagged Back to the Future, Gremlins, Marvel Universe, Star Wars, X-Men. Bookmark the permalink.

9 Responses to Rustin's Spoils of the Week #34