Oh, now this is nice! Today's Scarabus variant, Azazel, is positively deilish! His horns and hooves are gloss black, and his skin and fur are red. He's already looking sharp, and we haven't even mentioned his clothes yet. The armor is black and grey, while all the cloth bits are a lovely purple. If you ask us, purple isn't used enough in designs these days. And this is a really great shade of it, too - not too pink, like orchid, nor chalky like plum. Azazel is the first Scarabus whose accent colors are not all the same: while the translucent bits (the balls on his shoulders, the flames that trail from his fingers) are amber, the solid colors on his gems are yellow. His Timekeeper dresses in metallic purple, as well, though it's bluer in tint. 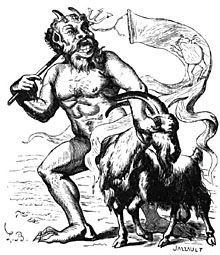 Fans of X-Men First Class might remember the name Azazel being used in that film for the character everybody only knows as "Red Nightcrawler," but it's actually biblical in origin. He appears in the Book of Enoch (part of the Apocrypha) as an angel sent to watch mankind, but who instead decided to teach them about metalworking, precious gems and make-up. His punishment was to be tossed onto sharp rocks, where he had to wait for the end of the world. The name also crops up in Leviticus, for the scapegoat ceremony: two goats are chosen from the herd, and a random drawing determines which one will be sacrificed to God, and which one will be marked with all the sins of the community and sent to Azazel (a place, not a being - they'd take the goat up the mountain 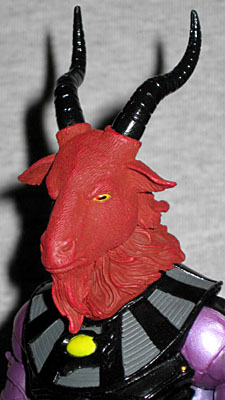 and push it off, tying the name back in to those sharp rocks again).

Since he's associated with goats, you can probably guess what Azazel's secondary head looks like. This isn't just a special new face, it's a full head: you have to swap them at the neck. Since Scarabus' ridged neck would look slightly out of place with a furry goat head on top of it, the set includes a separate furry ruff designed to fit perfectly over the neck and cape, to ease the transition. It also preserves the neck joint, so he's not stuck looking forever straight ahead when you trade noggins. Azazel's fur is red, and his horns are gloss black, tying the new head into the body perfectly. The eyes are yellow, and the Four Horsemen even got the proper square pupils on there - way to go! Square pupils are one of a goat's weirdest features, and it would be easy to overlook those when designing him.

Out of all the various versions of this figure we've looked at so far, Azazel works the best - yes, even including Scarabus himself! The goat head goes perfectly with the cloven hooves, making it look like the figure was designed to be a goat from the beginning. The colors are superb, too, making for a terrifically demonic figure.