Rustin's Spoils of the Week #38

Another week, another haul! 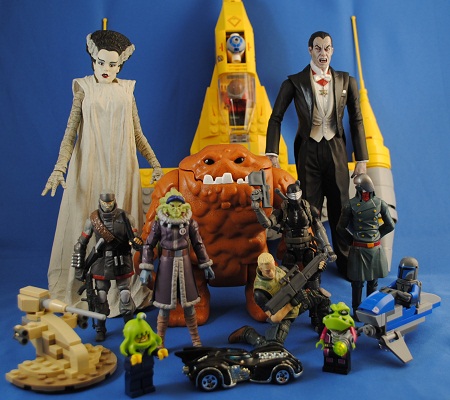 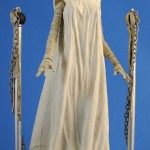 There are few things I love more than Universal Movie Monsters so I have been very excitedly following these figures as they come out very sparingly from our friends over at DST. The Bride is Toys R Us' exclusive for this year, which seems like an oddly mainstream Monster to not get a deluxe Select base but ultimately I guess it makes sense as there's not really any major set pieces she could come come with. Well, to be perfectly honest a Select version could come with the operating table and an alternate bandaged head but... I guess no such luck. My beloved Jean St. Jean sculpted this figure (check out a cool "Making Of" on the Art Asylum site), and it really is a fantastic one. Like Dracula, they don't have likeness rights to the actress (Elsa Lancaster) so Jean did a great job of homogenizing the Scream Queen into the icon regardless of the likeness. I love sculpted fabric to softgoods so that gives this figure a clear win over the Sideshow version as the gown is awesomely sculpted. The only downside is that the Bride's body appears to have shrunk in production so the gown now hovers almost ¼" over the shoulders. The base is fantastic with the two metal prongs dangling sculpted bandages and real, metal chains. Overall this is a winner of a figure and certainly worth picking up. Be warned though, with the neck is balljointed, the factory actually glued it place causing it the head to snap off for me. 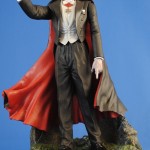 The most controversial figure in DST's UMM line chiefly in that they don't have Bela Lugosi likeness rights are thus, the figure is based on Universal's control art. While it can be hidden on the Bride (white dress and fright wig? That's her!) Dracula is Lugosi, so the weird face is hard to miss. Overall this is a pretty good sculpt, though shockingly under-articulated (balljointed head, shoulders, swivel wrists and waist). The cape is fully removable but clings onto the shoulders remarkably well! This TRU version comes with an open-mouth headsculpt and a purple under coat to the paint. I really like that they not only gave the TRU and Select versions different heads but different skintones as well (the Select version has a better closed-mouth head and yellow tone). The real winner here, though, is they cool base - complete with two headstones! Sadly, this figure is not free of production errors either and in this case the legs are mildy warped causing the feet not to be evenly on the ground. Thus is tends to fall backward, even with both legs pegged onto the base. 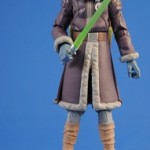 As stated last week I am a perpetual sucker for figures in cold weather gear, and Kit is no different. He is basically just a straight repaint of Plo Koon, with new forearms, hands and head - he even has the same clip-on ice claws for his feet like Plo. Kit also gets a very cool pair goggles to shield his big ole bug eyes from the blinding snow. They clip into semi-circle grooves on his temples which actually let swing up to his forehead while staying snugly on. Very well executed, Hasbro! 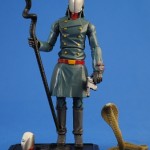 You know what... this is my favorite Cobra Commander design. It does a neat job of redoing the silver helmet but more importantly has a cool, high-collared over coat that does a good job of blending the regality of his presumption and the officialness of his militarism. I just like it. The bummer though is that it is in the animated style. It's not a bad style, but it just won't fit in with the "regular" figures like I'd prefer it too. He also comes with a black version of the familiar Snake staff, a handgun, a cool cobra and comes packaged in an alternate head that's sort of a half silver mask. That one's an interesting idea, but toss it for the full silver and you're good. 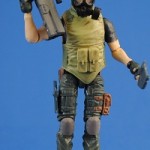 For some weird (read: cost savings) reason the Joes seem to all come in an awkward realistic/animated hybrid style that doesn't really work. I really like the T-Shirt and gloves look these days, so add to that the cool new flack vest and this was an easy sell. He comes with a gas mask that we've been seeing for years and a new rifle and not one or two or three but four - four! - handguns (though only one has a peg to attach to his right thigh)! The guns all have a cool, animated look and I really dig the axe-like appearance of the handguns, but with palms are too open to comfortably hold any of the guns. This is more a "get them to balance" sort of affair. 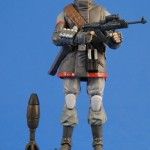 Like Cobra Commander, he's more on the animated end of the style spectrum. He comes with a machine gun, a machete, radio, a rocket gun and a big giant missile/rocket. It's pretty cool but other than the machete scabbard he has no way to carry this stuff other than his hands. The big rocket is cool, but what's it's purpose? One the up side he can actually hold both handles on the machine gun. On the downside he has such a goofy mask on I came close to not even getting this. 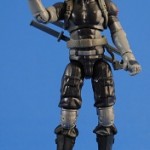 As Monkey Boy recently pointed out this figure is basically just a repaint and thus, like Duke, fails at fitting in either style - real or animated. I dig his big handgun (it's this silly but cool axe-like look on these things!) but his throwing knifes do little for me. Included is also two lengths of katana sword. I don't know... it's an interesting new Snake-Eyes variant but by no means one of the best. I should also note that all four of these figure have swivel wrists with added articulation of vertical hinge on the right hand and horizontal hinge on the left. 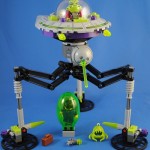 One of my good friends is obsessed with the Alien Conquest line but honestly it just doesn't click for me. The Alien ships are neat enough but not exactly exciting. When I saw this set marked down to $15 I couldn't resist, though. It's a fun build but the legs are sort of too big with too little articulation to really "work" for me. I do dig the easily pivotable laser cannon though. The best part is that the "ship" part is easily removable from the legs and makes for a cool little attack saucer. There is a little holding pod for a mini-figure that is also removable on the back of the ship too. Included is a Business Man with briefcase and an Alien with a laser gun and head-hugger alien for the Business Man. This is my least favorite headsculpt for the new Aliens but I do dig the idea of the mind-control slug for the heads. 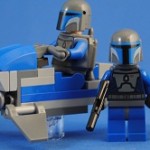 I've been none too crazy about the Battle Packs. I really like the idea, but between the bizarre mini-vehicles and too varied characters I haven't bought many. In fact I only have this because it came free when I bought the Queen Anne's Revenge (which is very cool but too big to review here - apologies). Turns out this set is awesome! Four identical but cool mini-figs make for perfect troop builders. More importantly the build pieces are great! Included is a very good version of the Not-the-Cop's-Bike-in-the-new-Star-Trek Mandalorian hover bike, plus a cool little cannon turret and an elaborate hand-cannon too! This is exactly what these sets should be. If only this were Stormtroopers or some force I'd be more interesting amassing more... still, an excellent set and definitely worth getting for any Lego and/or Mandalore fan! 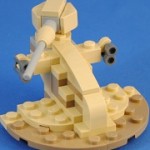 Droooooooool! The only thing I love more than Lego Polybags are Micro-Scale Legos so this thing is a not unlike a dream! It's a fun, quick build using more one-by-one bricks than I would expect from a polybag. I would have liked a little bit more width to the body on the base but overall it still works. In fact this is one of my favorite sets yet! I scored this in Target's Halloween section. Not really sure what this has to do with Halloween but I'm just thrilled to have it. 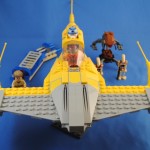 With all the hype building for The Phantom Menace starting to build I find myself becoming consumed by an odd nostalgia for that nightmare. Thus, after looking at all the awesome new figures and the incredibly fantastic new Naboo Fighter coming from Hasbro I had to run out and slake my lust with this one. It's a fun build that took the better part of two hours. It's a good looking recreation of the iconic ship and does a decent job of capturing the curvy look of the ship in this more blocky style. It comes with a Naboo Fighter Pilot, Anakin (he has a second face featuring the podracing goggles) two Battle Droids and R2-D2. R2 fits into a port behind the cockpit which features a little "plunger" to help eject him. A cool touch is that with R2 in, the plunger acts as a landing gear to balance out the ship on its engines. The coolest feature though a port under the fuselage that acts as both a place from which to launch missile and a plug for a display stand. There's also a none too useful Fighter Deck Tram and a neat but out-of-scale Destroyer Droid. It's a good set, but honestly nothing too special for you non-Naboo Fighter fans out there.

Scored this little bugger for retail at Target which is just lovely. I'm no gamer and thus have not played either of the Arkham games but I do hear they're just the bee's knees. This is a neat Batmobile toy. It's riffs on the Burton-mobile shape but adds a lot of vac-metallized machinery and translucent blue windows. I still prefer my Batmobiles to be slick (my favorites being the Burton and Animated Series ones) but for less that $2 this a cool addition to the collection of Batmobiles. 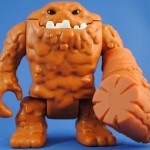 I stumbled across this for $5.50 at Big Lots and finally broke down. I'm just a sucker for Bat-villains, and especially the more cool ones from The Animated Series like ol' Matt Hagan here. I also dig that he's both accurate and a full set himself, rather than a figure and some dumb vehicle. Five points of articulation, swivel shoulders and hips plus hinged head. The latter allows him to "eat" just about any Imaginext figure you'd care for him too. He also gets a "plus 1" in the guise of a rubber mallet that can slide over his hand duplicating his morphing abilities. The mallet has a slit in it and the secret to getting it on is the slit goes on the bottom. Once I figure that out It went on easily and actually does a better job of blending with the arm than it should.

7 Responses to Rustin's Spoils of the Week #38