Rustin's Spoils of the Week #41

This is pretty significant week for yours truly. Not only is it Thanksgiving, I am moving back to California. My job moved me to Chicago last summer but that company is gone now and thus, so am I. I love Chicago but it's time to return home. While it'd be very easy for me to bitter about my job it definitely had some great aspects to it and in honor of the holiday I'd like to give thanks for the best of those highlights - the international travel. Last December I spent almost three weeks in Shanghai. While it was as glamorous or exciting as some of my other destinations, it certainly felt the most exotic and thus was my favorite of the foreign cities I visited. Once the sun sets the illuminated skyscrapers really give you the sense of being in Blade Runner. There were certainly some great sights to see but you know me, fanatics, I've got my eyes on the toys. 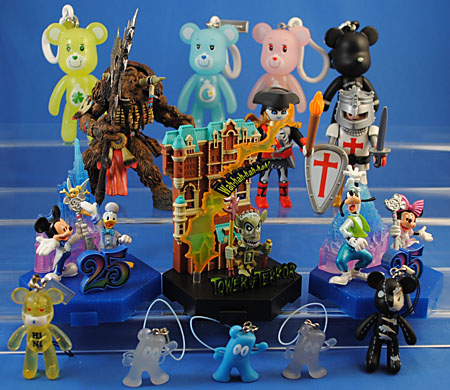 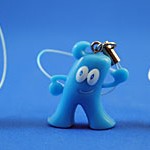 During 2010 Shanghai hosted China's International Expo, which was in essence one of the fabled World's Fairs of yesteryear. By the time we were there, though, all of the fairgrounds were closed and demolition had already begun, leaving the Chinese Pavilion as the sole reminder of the Expo. The icon for the show was this weird little Sky Blue "A" man that we nicknamed "the Toothpaste Guy" and despite the Expo being over he was still all over the place. As something decidedly unique to Shanghai I knew I couldn't leave without a keepsake of his visage and after a lot of option weighing I went with this set (bought at the actual China Pavillion, thank you very much). It's "Toothpaste Guy" thrice over as little cellphone dangles and best of all each is glows in the dark! We have a milky one which is cast in GITD green plastic and thus he glows the brightest. Next is a solid sky blue "signature" version. This one has a wash of GITD paint over it and glows green at a "medium" level. Finally is a translucent one with a clear cost of GITD blue and surprisingly he glows the poorest (barely at all) of the three. Each has a sturdy strand closed in a loop by a metal fastener linked via ring to the head of the figure. A cute set of a cute character. 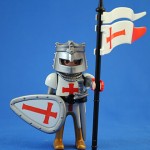 A couple of nights we had dinner at the Xin Tian Di district and towards the end of the trip went for a stroll around the shopping area, which is where I stumbled upon the highest concentration of Playmobil I've ever seen. There is a store called "Wise Kids" with some baby stuff in its small surface level store, but go downstairs and the large basement is half full of Playmobil - it was glorious. Everything was pretty expensive but I stumbled across these two Specials figures I have lusted for greatly and could not refuse. This is the third Crusader that Playmobil has done and in some ways it's the best. I'm not too crazy about the gold legs with silver arms and the whole thing has a less-than-historically-accurate feel, but you know what - it's still darn cool. That helmet is just wicked and the clip on white shoulders with the two-piece legs really help convey the tunic look. He comes with a shield, helmet, sword and flag pole with two flags. It's a stellar little set, not as battle-buildable as the previous two, but much more visually engaging. 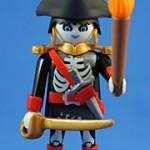 True to form Playmobil launched their Ghost Pirate theme with this pseudo teaser figure and boy is it cool! There is just an excellent balance between white, black, red and gold making this guy really pleasing to look at. He comes with a sword, a dagger, and a torch. Plus his torso strap has two "holsters" on it allowing this guy to look even cooler with his gold sword strapped to his back! The white does glow in the dark, but not as brightly as the Ghost Pirates proper. By far this is one of the coolest Specials they've done and certainly the King of the Ghost Pirates! 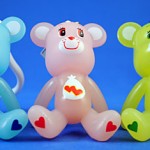 So whats the big collectible in Shanghai? Popobe Bears! They're all over the place and come in all sorts of themes but when I saw the Clover Care Bear my ears perked up. You see, that is the Care Bear I had as a child - O yes, dear reader, I had a Care Bear! When I found they also had the Heart and the Moon Bears I was pretty much sold so I was able to haggle with various cart vendors and complete the collection. Each has 5 points of articulation atthe Big Five, and all are swivel joints. Each bear is rotocast, and sadly the Green one has a bit of a sticky feel to it. Each also has a metal O-ring in its head to which a plastic clip is attached. They have all different decos for these bears but these just seemed to work the best, for obvious reasons. This is a cool set with some fun nostalgia (of both childhood and adult travels). 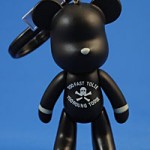 One of the things you secretly look forward to on every trip to a foreign language country is discovering some great Bad English. Shockingly in my travels I have found very little so-called "Engrish" but of what I did find, this bear more than takes the cake! TOOFAST TOLIE / TOOROUNG TODIE". Classic! And it's scrawled on a bear's tummy around a skull-and-crossbones! I have no idea what the deal is with these bears, at first I thought they were just the Chinese equivalent of Medicom's Bearbricks but the quality and incredibly wide range of characters makes me think these are just mass market bootlegs with no real rights or licenses to the characters. They "had" figures from some notoriously tough-to-get licenses and some of what they did have was oddly "just" off-model. Who knows, but at least I have this awesomely ridiculous toy! 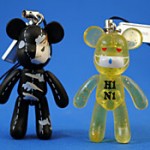 The most common format of the Popobe Bears were these little guys, about two inches tall. Most of the "licenses" crossed scales but some deco's seemed to be available only in one or the other. I picked up these two for their simple coolness. The black one with gray stitching as though it were a stuffed bear, but a ripped face reveals a human underneath - Aaaaaahhh!!! But, much as "Toofast" Bear, the other was an immediate Must-Have. Cast in translucent yellow filled with glitter flakes the bear has two sickly, red, half-circle eyes and a mask on over its mouth. On the belly, in big type, it reads "H1 N1." Wow. Now that is a toy worth treasuring! Mildly offensive and definitely not timely it's like the best kind of joke. 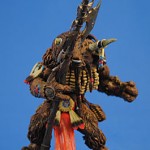 Years ago SOTA did a three figure line of World of Warcraft figures, but it took them a long time to get the figures out on shelves, and even then I only ever saw them in limited quantities at conventions. So imagine my surprise when I not only found those 8" scale figures in Shanghai but, right next to them, 4" versions as well! I had no idea these mini figures ever existed and am tempted to think they are unauthorized reproductions were not the quality of the figures so good not to mention both Blizzard and SOTA's logos being on the package. Of the three figures in that line this Tauren was the most interesting to my eyes and thus I went him. They come in a large blister pack and are more statue than toy. He's got zero articulation but does have a removable staff and "shoulder pelt" (an additional shawl-like animal skin over his shoulders and upper back. The staff fits in the right hand well enough, though without any articulation it's hard to keep the blades out of the guy's face. Shockingly for being about a half or a third the size of the standard figure the sculpt retains a lot of the texturing and detail while the paint is near-perfect. This is just a great little figure and a reminder that SOTA had to fold their cards far too early. 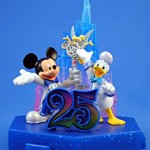 I love Disney Theme Parks so when I stumbled across these sets at a little toy shop I nearly flipped my lid. Each has a generic base and the Anniversary sets include two characters, a "25" logo and the major, central icon of one of the two Tokyo Disney Resort parks. This one is for Tokyo Disneyland and thus features the famous Cinderella's Castle (an identical castle to the one at Walt Disney World in Florida) castle in glitter-filled translucent plastic that fades from pink at the bottom to blue in the middle and light-blue at the top. It even has a little Tinkerbell that connects to the front of it. Mickey and Donald come in gray/white/silver/blue Tuxedos with both having solid sculpts and good paint. The "25" logo references Tokyo Disney Resort's anniversary. The base has about 12 pegholes that fit the pegs on the bottom of each element which allows you the ability to switch things up a bit, though to get the intended tableau there is pretty much only one configuration that works. It's a great little set and something pretty unique to TDR (though I had to go to China to find it). 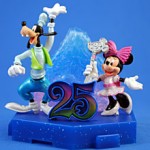 I have tried several times to find out more about these sets but with it's all to no avail. This one very much follows the format as the previous though it features Goofy and Minnie in their normal style of clothes but with alternate colors to better match the feel of the set. Instead of the fairytale castle it features Tokyo DisneySea's centerpiece, Mysterious Island, and its volcano along with the Explorer's Fortress in front of it. Paint and sculpt are quite good considering the small size of the pieces. The only downside to this one is that Goofy's thin, bent legs make getting his peg into a hole on the base more difficult than it should. The base is a generic hex shape with pegholes on the top and a tab on every other side to allowing to be mated with with any collectible utilizing the same base. I was able to relatively easily connect all three scenes together though it took some trying and was quite difficult to remove. Another cool looking and fun set! 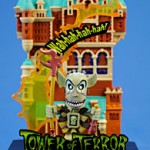 Unlike the previous two dioramas this was part of a definite wave which is even pictured on the box and consists of this set plus five others featuring different Disney characters trapped on a falling elevator car. The only set the store had was this one, though, and thank goodness for that as it is amazingly cool! It's composed of the generic base (this time cast in black), a mini Shiriki Utundu idol, a lightning splash done in translucent plastic, the Tower of Terror logo and a painted backdrop of the ride building's exterior. This is just a darn cool set! The "right" level of visually active to draw and hold your attention. Despite it being very specifically from a different country this is still very much one of, if not my favorite thing I got in Shanghai.

This entry was posted in Disney, Playmobil, Rustin's Spoils of the Week, SOTA and tagged Care Bears, GitD, WoW. Bookmark the permalink.

2 Responses to Rustin's Spoils of the Week #41