Rustin's Spoils of the Week #46 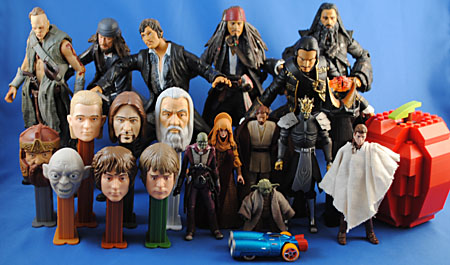 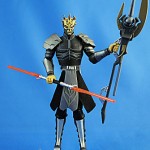 The harder to find but much cooler looking "armored" Savage Opress was found at last inside Disneyland of all places. Sure it cost me a premium but this guy is packed one per case! It's the same as the shirtless Opress save but for a new upper torso and upper arms. Much like the previous figure it too looks better than it actually is. The knee's don't have much of a range of motion but fortunately the shoulder and elbows balljoints work fine. He comes with a double-bladed lightsaber and the same missile-launching spear-axe as the other one. It's a right cool figure all around and a very worthwhile addition to the Clone Wars rogues gallery. 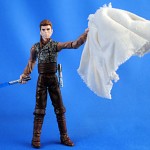 Over a decade after the original's release we finally get a re-sculpt of the one Hayden-Anakin costume least touched by Hasbro. The original was a riff on the original Kenner "telescoping lightsaber" concept which rendered a flawed figure. While not perfect this one is quite good. This is Anakin's "peasant" disguise, which of course looks more regal than anything in the entirety of the Original Trilogy, and to complete it he comes with a removable soft goods poncho. It's got some stitching on it that probably is meant to give it some shape but just makes it fit poorly and hand oddly. The head is a disproportionately large but it's passable enough for such a variation. Included is a lightsaber hilt and ignited lightsaber. 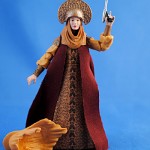 To go with "Peasant Disguise" comes "peasant Disguise" Amidala, cause seriously... what's more peasant-y than this outfit... ("well, the power of myth...") Regardless it's quite a fine sculpt of one of the few Amidala outfits we've yet to receive (where's my goshdarn re-sculpt of "Theed Invasion" Amidala from Episode I with light-up feature!?). Especially neat is the interchangeable crown (peasant, remember) and shroud head pieces, both of which fit right snugly on the head. Included his her Episode I hairdryer blaster. It's a good figure for what it is, kids. 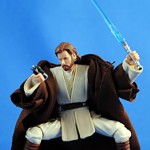 I never got this figure when it was originally released a year or two ago so I just went for it this time around. Soft goods robe - boo. Soft goods skirt allowing for full range of motion from balljointed hips - yay! It's really those balljointed hips that make this of any real note beyond the tens of Episode II Obiwans you already have. 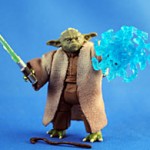 Oh yes, but I am a slut (don't believe... the pudding-laden proof is a few short scrolls below, True Believer) and thus it is that I have bought Episode II Yoda. And primarily then just for his dumb little lightning ball accessory. Yeah... I'm not sure what I was thinking either but here it is. If you need another Yoda you could do worse than this. 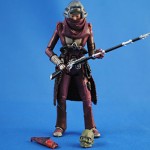 Much like "Peasant Disguise" Anakin I've been waiting a long time for a re-sculpt of this character and boy was it worth it! Balljoints and excellent sculpting galore, as if that all wasn't enough she is loaded with accessories too! A removable helmet, with removable binoculars and interchangeable stretched and dropped scarves, there is a blaster as well as a rifle. But wait, what's more is an interchangeable head of her true Chameleoid face! Hasbro! You and you're going the extra ten miles! The only downside here is that the binocular thing doesn't lineup with the eyes well, or at all when either scarf is plugged in. The only real improvement would be a soft good skirt allowing her to fit in her Speeder but I'm sure we'll see that in 2013 when Attack of the Clones gets it's 3D re-release. This figure is a perfect Hasbro re-sculpt and got me very excited. Until I realized it was Zam flippin' Wessel... or as you might know, "Who?"

Jakks Pacific - Pirates on the Caribbean "On Stranger Tides": Barbossa 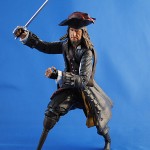 So here we go. The ill-fabled second series of Jakks' "Collector" Pirates of the Caribbean line. The figures continue to actually be worse than the film they are based on, which is virtually inconceivable. This is Barbossa his final scene of the film in which he once again sports his signature costume from the previous films. He comes in a laughable, extreme action pose that can somehow miraculously balance on its own despite having a peg leg. The figure comes with his hat, sword (inaccurate for the scene) which can also fit in the sash as well as the gun-with-blast-effect and crutch from the first figure. Neither are useful due to the pose and the "claw" hands which can only barely hold the sword.

Jakks Pacific - Pirates on the Caribbean "On Stranger Tides": Blackbeard 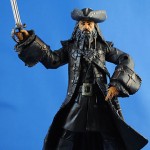 I'm so upset by this figure I can't even come up with a snarky comment. Its the exact same figure from Series 1 but with hinge-joints added at the elbows. Pass-able if not for the piece of the Build-a-Figure he comes with. This is seriously the biggest "#@$% YOU" figure any company has ever released.

Jakks Pacific - Pirates on the Caribbean "On Stranger Tides": Jack 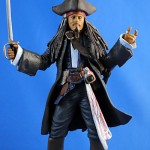 Series 1 had an "X-Treme Pose" Jack that caught a lot of flak from collectors so this is as generic a pose as is humanly possible. He comes with his hat, sword and nothing else despite the photography showing two pistols which the belt clearly has holes for. Best of all? The figure can barely stand at all thanks to it being back heavy and having very limited articulation. Swivel cuts at the boots, wrists, shoulders and neck - 7 points total. A good likeness, lost under thick paint, but overall this is the worst 6" Jack yet released.

Jakks Pacific - Pirates on the Caribbean "On Stranger Tides": Philip 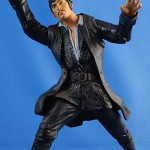 Oh my god. And I thought the 4" one was regrettable. This seems like a decent enough figure until you have him in your hands. He has a stunning seven points of articulation with hinged elbows and swivel wrists, elbows and neck. That's right - nothing on the body or legs. But before you get really concerned, rest assured that (aside from the BAF part) this figure comes with no accessories. His dagger is sculpted in hand, and is warped while in package. He's also notably out of scale and would stand an inch taller than Jack were he in a similar pose. I.... How... Seriously. What the hell is going on at Jakks!? 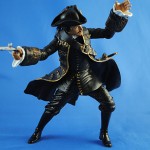 Hoo boy, the other "didn't come in Series 1" character from this series. It's the nameless Spanish Officer who has the pleasure of being the only character in the 6" line not available in the 4" one. He's a good sculpt but another aggravatingly extreme pose. He's got eight points of articulation: swivel boots, swivel waist, swivel wrists, hinged elbows, balljointed shoulders and a swivel head. Accessories include his hat, sword and pistol. The finger-guard thing on the sword is too small to fit his hand and thus it cannot be held. Fortunately though it can fit in his scabbard, the only 6" figure with that feature. The pistol is likewise too small to fit in his "claw" hand. These figures are just so incredibly thoughtless the mind boggles that Disney approved any of this crap. Baffled, shocked, frustrated, angry and so much more. These are just shockingly bad figures. And I still bought them all for $12.34 at Target. At least they were technically on discount. As I promised above - I am a slut. 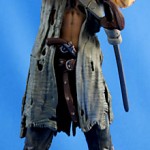 Just like Series 1 the best figure is the Build-A-Figure, in this case the titleless Zombie character. He has a series high of 11 points of articulation: hinged knees & elbows, T-crotch, with swivel wrists, shoulders and head. This guy also gets a pistol and sword for accessories (you could also count his sword-belt-sash-thing and shirt as accessories seeing as they're removable). Sadly the hips pegs pop out of their sockets easily but they do plug right back in. Decent paint and sculpting helps this guy out too. Here's the breakdown of his pieces: Blackbeard - Right Arm, Sash, Pistol; Jack Sparrow - Left Arm, Sword; Barbossa - Right Leg; Phillip - Torso/Head; Spanish Officer - Left Leg. 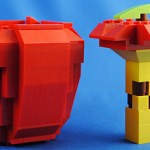 A Christmas present from a dear friend and my Lego co-conspirator, I've coveted this polybag (#33000000) from his collection for several months. It originated as a promotional set for the 2010 grand opening of the Lego Store at the Rockefeller Center in New York and it is an awesome set. 133 pieces builds 1:1 sized apple. I noted it came with yellow pieces which I assumed were meant to be internal structure until I turned a page in the instruction and found it was for constructing the Apple's Core. That's right, this sucker is hollow and you can remove the top to have the post-snack version. Too. Damn. Cool. The only problem with this set is that it is not a standard release. This is the perfect kind of thing for friends and family. It's just a stellar, quirky, fun, easy Lego set! 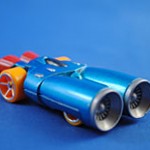 What can I say, there is just something about this design that I fell in love with the moment I saw it. A great color combination (and we all know I'm a sucker for metallic blue) it's just a, literally, perfect adaptation of the the toy binoculars into a stock car format. And yes, even I know how weird of a thing that is to say. Target just marked these down to $2.50, and while that's still a bit much as compared to standard Hot Wheels cars this was just too cool to pass. 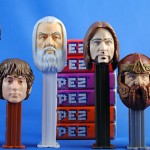 A Christmas present from some very dear friends who stumbled upon this Walmart Exclusive set and knew immediately it would be my "precious." This comes in a box print with surprisingly cool foil art (meaning the art is shiny, reflective, metallic in nature though it is just a cardboard box). A sticker on the tray inside denotes this being number 011,264 of 150,000. Though not a small "limited edition" it's nice to have a return to knowing how many in total there actually are. This set includes Pez dispensers of Frodo, Sam, Gimli and Gollum on short, half-stalks which is cute and the first time I've seen short Pez Dispensers. We also get Aragorn, Legolas, Gandalf (the White) and the Eye of Sauron atop Barad-Dur. A sticker on the box window indicates that is the Eye of Sauron dispenser that is exclusive to Walmart (draw your own subtextual conclusions). I don't know what comes in the non-Walmart version but this Barad-Dur is pretty darn cool, with the Eye being a separate piece cast in translucent orange. The heads are all pretty solid sculpts with good enough paint for Pez. Interestingly all of the hair is a separate piece glued on, to save on paint, save for Gandalf and Gimli, both of whom are more beard than man. Finally you get 12 packs of Pez candy: four Orange, four Grape and four Cherry. I'm honestly surprised by how fun this set is and it will definitely have a happy home in my LotR collection!

This entry was posted in Hasbro, Jakks, Lego, Mattel, Rustin's Spoils of the Week and tagged LotR, Pirates, Star Wars. Bookmark the permalink.

4 Responses to Rustin's Spoils of the Week #46