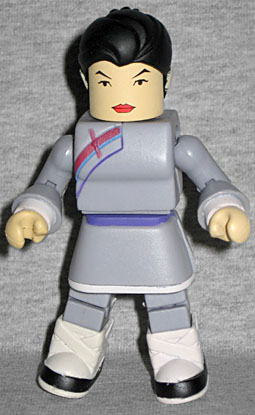 When Li Mu Bai decided to give up the way of the warrior, he gave his sword the Green Destiny to his old friend Yu Shu Lien, entrusting her to see it safely to Peking. The two share an unrequited love, though they've never admitted it to themselves or each other.

Shu Lien has a very cool outfit, though it's not quite as iconic as Li Mu Bai's chengshan. Hers is a sort of pale lavender-blue outfit with flared sleeves and a shirt piece below the belt. We've said before that Minimates could really use a "female" torso like PALz had, but since this figure's shirt is a separate piece, she actually gets that: it's molded with a boob-bump, so she actually looks like a "she." It wouldn't work on a 2" figure, but it works on a 3" one like this. The brocade edge of her shirt-flap is sculpted in, but the matching patterns on her sleeves are absent. She gets new boot pieces to create her slippers and the wraps around her ankles.

Yu Shu Lien was played by Michelle Yeoh, making this the only Minimate to be based on a Bond girl (unless you count Madonna, which, come on, nobody ever would). The "likeness" is practically non-existent: she has a face, but it doesn't really try to look like Yeoh. Her hair piece is unique, with the hair pulled into a bun and tied with a brown sash. 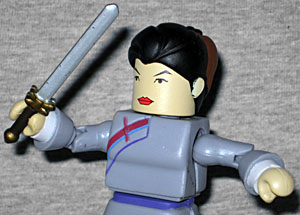 The figure comes with one accessory, her sword. It doesn't get a fancy name like Green Destiny does. The 3" Minimates have the same 14 points of articulation as their little cousins - neck, shoulders, elbows, wrists, waist, hips, knees and ankles - but the range of motion is slightly better in these larger figures. For instance, the arms can go nearly perpendicular to the body, instead of stopping at about 75°. And of course, the bootfronts keep her ankles from turning.

Michelle Yeoh had dreams being a professional ballet dancer and even studied at London's Royal Academy, but a spinal injury put an end that. It certainly hasn't seemed to hamper her movie career any, since she's known for doing her own stunts. This Minimate only looks the vaguest bit like her, but it's still a good find.