Gwen is torn between loyalty to her policeman father and her love for Peter, who is quickly becoming the bane of her father's existence. She also works part-time at Oscorp.

In the comics, Gwen was never anything but an air-headed party girl: the idea that she'd have a science background to rival Peter's comes out of the excellent Sensational Spider-Man cartoon, which was unceremoniously cancelled to make way for the turd-tastic Ultimate Spider-Man. Gwen is played in the new movie by Emma Stone, but she looks so unusual with blonde hair that it's hard to judge the likeness. She's wearing a blue jacket with a pink scarf, and her blonde hair spills over her shoulders. 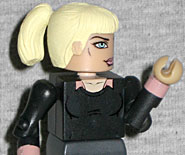 If you don't like that look, she comes with a second hairpiece (pulled back in a ponytail) and replacement arms so you can take off the coat. The movie didn't try to put Gwen in clothes that matched her comic appearance: so no black headband, and nothing green at all. She's wearing a black sweater over a pink shirt, brown boots with grey knee socks, and a dark skirt.

A former associate of Peter Parker's father, Connors is obsessed with 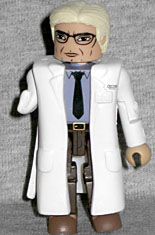 cracking the code of reptile DNA, which allows lizards to re-grow limbs with ease. Could it allow him to regain the arm he lost?

You have to feel bad for Dylan Baker: he spent two movies playing Dr. Curt Connors for Sam Raimi, and as soon as it's time for that work to pay off and the Lizard to finally appear, the entire series gets rebooted and he misses out, replaced by Luna Lovegood's dad. This figure gets the important things right: a white labcoat, and a new "folded sleeve" arm. It would have been nice to get a "restored" arm as well, maybe with some green scales, but who knows if that happens in the film? The coat is printed with a tiny Oscorp logo, above what is presumably his (sculpted) ID badge.

It's kind of crazy that this TRU exclusive set is the only way to get Peter's girlfriend, but it's neat to get a civilian version of the film's villain as well.