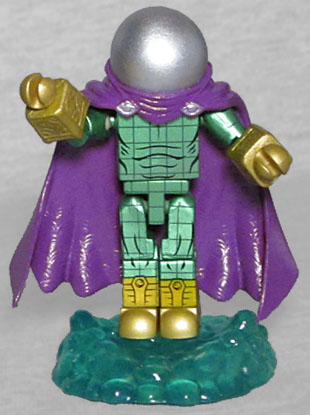 Quentin Beck was a Hollywood stuntman who fell into a life of crime. He uses special effects and hypnosis to commit daring robberies.

This is our third Mysterio, and while it uses some of the pieces from the existing ones (those square gloves, specifically), the cape and head are both new. You can tell, because the cape and head are now one solid piece, rather than two. The diamond/eyeball clasps on his collarbones are smaller now, and the cape doesn't fold around to the front the way it used to. There's still a texture on the interior, but it's lighter. This costume is the green-and-yellow version, not the green-and-also-green. He gets a new base, which looks like bubbling smoke. It's a translucent dark teal.

Granted power by an experimental generator while submerged, 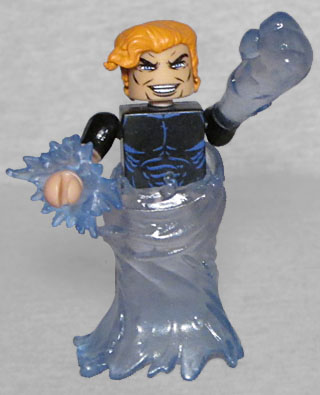 Morris Bench has the power to turn every molecule of his body to water.

This set is definitely Far From Home-inspired, even more than the Molten Man set was - although even Hydro-Man has had a Minimate before. In fact, you'd better already have that one if you want this one to be complete: like Lt. Dan or Hasbro's garbage-ass Cannonball, Morrie ain't got no legs. This 'mate is (loosely) based on the cover of Amazing Spider-Man #315, so his lower body is just a water spout, cast in translucent light blue. Same goes for his big left arm, and the little explosion effect that fits over his right wrist. His chest is detailed well, and his hair is a new piece, with the silly little spit-curl thing Todd McFarlane drew him with.

Series 77 is one of the ones that has a Build-A-Figure, so the set includes some pieces for that. The figure is the Spider-Slayer, and the pieces are its arms.