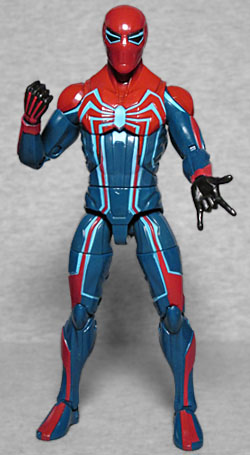 This is one of the new suits created specifically for 2018's PS4 Spider-Man game. And like the main suit, it's really only so-so. It was designed by Adi Granov, the same guy who created the Iron Man Extremis armor, and thus completely influenced the entire visual direction the MCU would take. So he's no slouch when it comes to design, but this... this is something.

As the name implies, the Velocity Suit makes Spider-Man go fast. It unlocks the "blitz" ability, which both speeds you up and lets you knock over enemies. It does not, however, 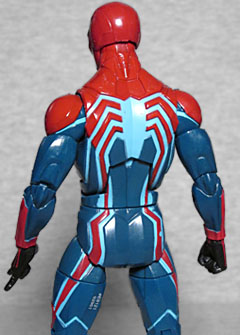 let you roll up into a ball and hang out with a two-tailed fox.

While the Spider-Armor looked like it was sized more for Miles Morales than Peter Parker, this figure is just as big and thick as the first PS4 Spider-Man. It's entirely a new sculpt, however, and not one that can likely be easily reused in the future: the texture is blocky, like armor rather than spandex, and those pale blue Tron lines, running from the logos on both sides of his torso all the way down to his elbows and knees? Yeah, they're sculpted in. All the red panels are raised above the blue surface, and even the head is new. Is Sony chipping in some cash to help get these Gamerverse figures made? Why do they warrant such detailed sculpts, when most other figures are just paint on an existing mold? 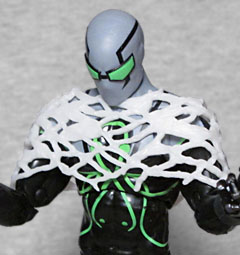 There are no surprises in the articulation - head, neck, shoulders, biceps, elbows, wrists, chest, waist, hips, thighs, knees, ankles - but he does get a new fun web accessory, one that will pair nicely with the Spider-Armor's face mask: a sort of "shawl" of webs, designed to fit over a 6" figure's shoulders. We'd love to see Hasbro keep these things coming. Give us something that will web hands together, or one for the lower legs. Spidey doesn't just shoot lines to swing on, he uses his webs against his enemies in creative ways, and for the first time the toys can, too.

Totally new sculpt, totally new accessory, and he still gets the BAF Demogoblin's left leg? There must be money coming from somewhere, because this series hasn't been raised above its $20 standard price the way the Black Widow figures will be.

"Spider-Man" and "neon glows" just don't belong together (as even the comics have shown us), but this does at least look like a natural evolution of the videogame's main suit.