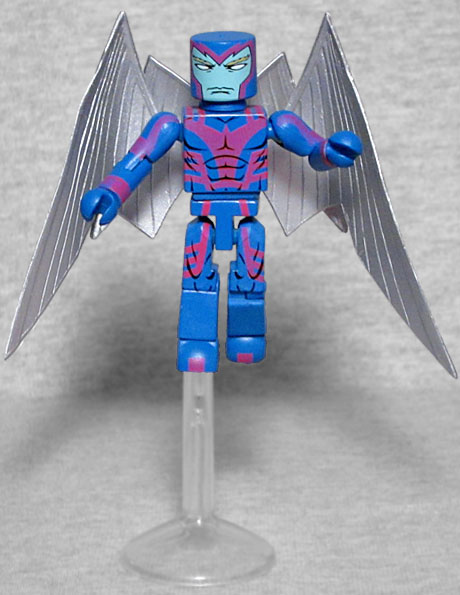 Warren Worthington III lost his feathered wings in battle, but was given new, metal wings by the mutant Apocalypse.

Archangel wasn't part of the previous X-Factor box set, but this figure isn't exactly new, either. The wings, surprisingly, are: they're not the same mold used up til now. The paint is more refined and delicate than the one from a dozen years ago, and he doesn't look as angry. We don't get the "Death" mask, meaning this figure has less versatility, but Minimate construction means you can swap it over here if you want. 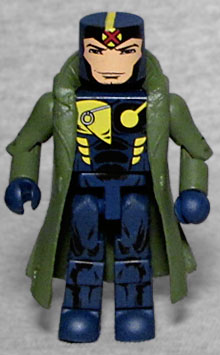 Jamie Madrox has possessed the mutant ability to form duplicates from birth. He has been a member and the leader of X-Factor.

Furry/furry, leader/leader, girl/girl... most of these pairings make sense, but who the heck decided that Warren and Jamie must always be paired together? The last Multiple Man was in more casual clothes, while this one is in his government uniform. Still wears a trenchcoat, though it's a different mold. A new mold! While the set has a flight stand for Warren, Jamie doesn't get anything - not even an alternate hand holding a mayonnaise jar. For the armybuilders out there among you, Luke's Toy Store has an exclusive Multiple Man two-pack, so you can really fill out the ranks without having to double-down on the flying Smurf.

Series 78 is one of the ones that has a Build-A-Figure, so the set includes some pieces for that. The figure is Strong Guy, and the piece is his head.