As mentioned in today's review, the MODOK Elvises were not the only threat Nextwave faced as they fought toward their ultimate goal. Here, from Nextwave: Agents of HATE #11, are the double-page spreads of wild creations, with the villains we could use toys of: 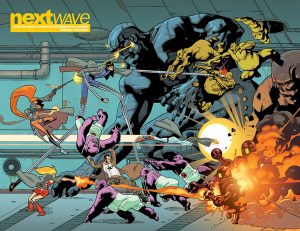 Nextwave versus the spawn of a terrorist cell disguised as a patriotic American corporation. 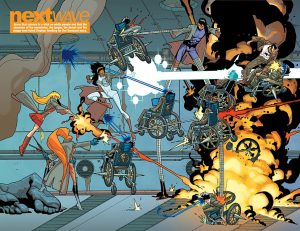 Nextwave know that science is a trick on white people and that the shamans of the mountains, the jungle, the desert and the steppe have hated Stephen Hawking for five thousand years. 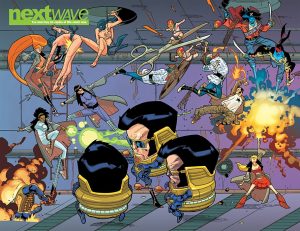 You must buy six copies of this comic now. 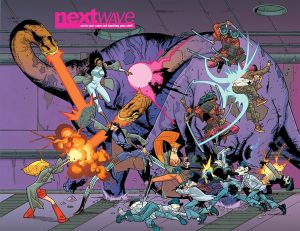 Nextwave are in your room and touching your stuff. 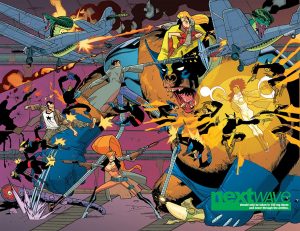 Nextwave should only be taken in 100 mg doses and never through the urethra. 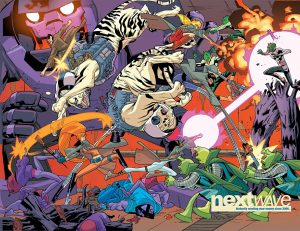 Nextwave: blatantly wasting your money since 2006.

Lots and lots of options there, and every one of them would be more interesting than another random Iron Man armor.

And just in case you were wondering, here's the set list from inside 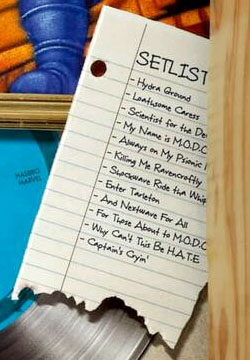 the set's packaging, with our best guesses of what they're all referencing:

(Some are obviously up for debate, and others are more likely inspired by later cover versions rather than the originals, but you get the idea.)

And, why not, here's the Nextwave themesong: