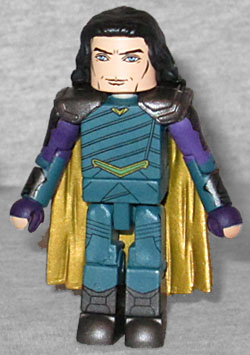 Well well well. Since the last time we reveiwed a Loki, Thor Ragnarok has actually opened in theaters, and so not only do we all know how wrong I was about Loki's presence in the film, we also know why he was wearing a blue outfit instead of his usual green: when you hang out with the Grandmaster's party people on the Grandmaster's party planet, you wear the Grandmaster's clothes. The blue-and-purple ensemble may not be Classic Laufeyson, but they do look very nice - especially on this Minimate, where they're just accomplished with paint. His cape and shoulderpads are a single sculpted piece, and his hair spills down his back - though without his horned crown, the new colors really make it hard to identify him at a glance.

The last time we got a Loki Minimate (from 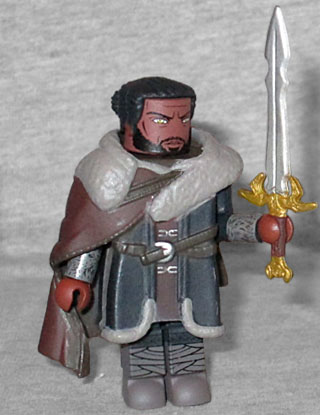 Thor: The Dark World), he was paired with Heimdall. And now here's this Toys Я Us exclusive, paired with Heimdall. The two barely ever interact, and yet they keep getting bundled! Heimdall is here looking his most Jesusy, with the cloak and the dreads and whatnot. Unlike Loki, his clothes are all sculpted pieces - and the way the fur-trimmed cape falls over his body means the right arm is fundamentally useless. You can't even use the elbow! There really isn't any other way to adequately "Minimatize" his movie costume, but in his most active Thor role to date, poor dude gets a Minimate that can do little more than stand still. And no, nothing's painted under the giant chest cap, so there's no taking it off. At least he's armed with his sword, even if he's going to have trouble swinging it. His eyes also have a better gold than before.