When Peter Parker discovered the powers the radioactive spider-bite 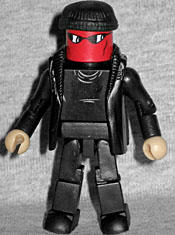 had given him, he decided to take to the streets to fight crime. Unfortunately, the police have no love for vigilantes in their city.

The "hero goes out and tries to work before he creates his iconic costume" trope is something that comes from Frank Miller's Batman: Year One, and is unique to superhero stories; after all, unless you have a character who wears a specific costume, you can't set stories before they wore it, can you? Pete's outfit is actually fairly low-key: black shoes, black pants, black shirt, black jacket, black hat... and a bright red mask with sunglasses. Nope, nothing conspicuous about that. Shouldn't he be wearing gloves, though? It seems like a bad idea to leave fingerprints all over the place. 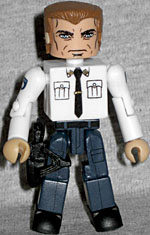 police department, largely due to the efforts of Captain George Stacy, the father of his would-be girlfriend Gwen.

This is the world's first Denis Leary toy (unless you want to count Diego the Sabertoothed Tiger from the various Ice Age films), which ain't half bad for a guy who became famous for ranting between commercials on MTV. The likeness is great, which means customizers can get to work on their movieverse Green Goblin figures (what with Denis Leary and Willem Dafoe looking so much alike). Since he's a captain, he gets to wear a white shirt instead of blue, but he comes with the same accessories as the ESU troops: helmet, vest, rifle, pistol and holster.

It's weird that both Gwen and her dad are only available as Toys Я exclusives, but just like his daughter, Capt. Stacy is worth tracking down, and Vigilante Spider-Man is different enough from everything else you own to be cool.