Hey, look! This guy is building a Lego set inside a big bag: 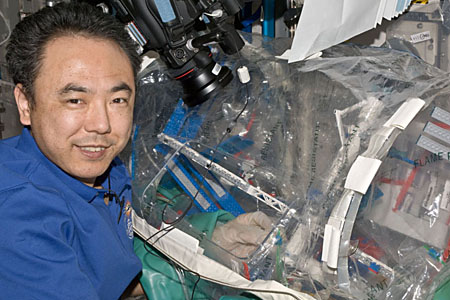 Wait, that's weird, why is he building it inside a bag?

Oh, it's to keep the pieces from floating away from him? Because he's building it on the International Space Station?! Well okay then! 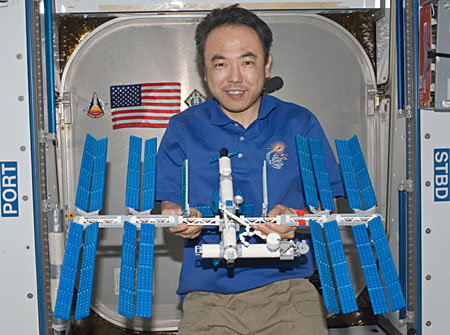 It took more than 200 astronauts from 12 countries more than a dozen years to build the International Space Station (ISS). Satoshi Furukawa, an astronaut from Japan, matched that feat in just about two hours - and he did it all while aboard the orbiting outpost itself.

It helped that his space station was made out of Legos.

The approximately two-foot (0.6-meter) long model, which replicated the nearly 360-foot (110-meter) space station was more than just a toy. Accompanied by other building brick sets that were launched last year, the Lego space station was part of an educational collaboration between the Danish toy company and NASA.

After piecing together the toy brick-built station, Furukawa used it as a demonstration for a series of recorded videos aimed at engaging and educating children about living and working in space.

"He really enjoyed doing that and he kind of became 'the Lego guy,'" NASA astronaut Michael Fossum said of his crewmate. Fossum was in command of the real station when Furukawa built the Lego version.

The real space station was declared "assembly complete" on May 29, 2011, during the penultimate mission of the space shuttle program. The same mission delivered the Lego space station.

Furukawa, making his first spaceflight, arrived aboard the station a week later. Using a step-by-step building guide, he completed assembly of the Lego station on Sept. 27.

Made up of hundreds of bricks, the model was launched in partially-preassembled "chunks" to help make up for the difficulties working with very small pieces in microgravity. The space station could not be launched fully-assembled, because like the real orbiting outpost, it could only be built in space.

"It's a solid model but I believe it can't bear its own weight under gravity," Furukawa said.

The Lego station's time fully assembled was short-lived, however. Due to the flammability hazards, the toy bricks could only be exposed to the open cabin air for two hours.

Just like parents telling their kids to put away their toys when they are done playing, Mission Control instructed Furukawa to take the model apart and stow it after his educational videos were recorded.

"Per the ground's instruction, I needed to put it away," Furukawa said. "It is stowed in a drawer in the [European Space Agency's] Columbus module right now."

To learn more about the project and read some more quotes from Satoshi Furukawa himself, visit collectSPACE. 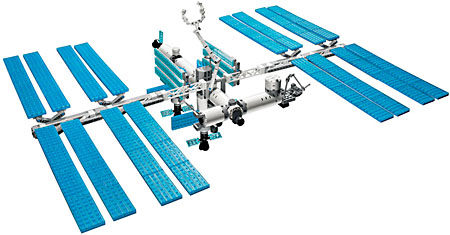 This entry was posted in Lego, news, videos. Bookmark the permalink.