No, this isn't about the (possible) racial overtones of Night Fighter Robocop; this is a story about the dangers of having too much free time and too little common sense.

The other day, Sprocket sent me a link about NECA's upcoming Chell action figure. Tumblr user birdbrainblue recently posted a... blog? A Tumbl? Whatever you call it, birdbrain posted a thing complaining about Chell, including this picture: 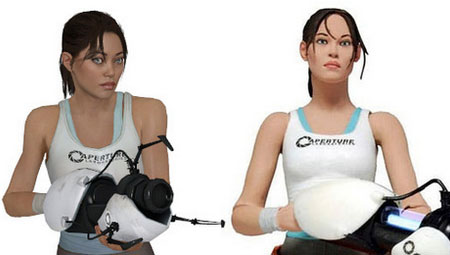 If you look at the picture above, you can definitely see that the skintone on the toy is lighter than the game render. But so is everything else. Every other element is darker in the digital version than it is in the toy photo. Everything. Here are two more versions of that same comparison image: 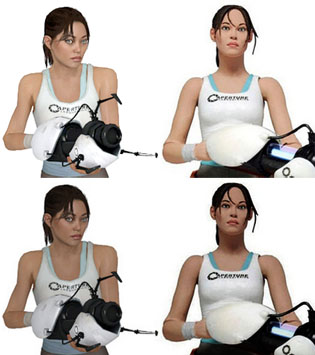 In both cases, we used the white of her shirt and her portal gun as the point of comparison: in the top image, we lightened the render until her shirt was white instead of gray; in the lower image, we darkened the toy. Notice that suddenly, when the comparison isn't unfairly skewed, the digital and physical Chells are functionally identical.

(They also complained about the facial features being longer and closer together, which is hard to judge, but can easily be contributed to the different angles at which the two images are holding their heads. But we won't know for sure until the toy is released.)

So basically, somebody fired up the Social Justice Mobile without actually understanding what was going on. Because if you don't gin up problems that don't exist, how can anyone see you rage against the patriarchy? Look, that may be dismissive, and we understand the fun of going on a good rant, but you've got to do your job ahead of time, and make sure the thing you're angry about is actually a thing. Or else you look dumb, and the good points you make get lost in the stupid...

This entry was posted in commentary, NECA and tagged Player Select, Valve. Bookmark the permalink.