An infiltrator sent to spy on humanity and report back to the Kree Empire, Mar-Vell rejected his people and used his amazing Nega-Bands to become Captain Marvel - 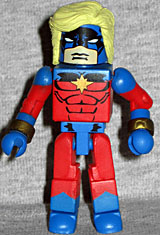 Protector of the Universe! Poisoned by the villainous Nitro, Mar-Vell succumbs to cancer and enters the after-life.

Marvel is looking delightfully era-appropriate in this Minimate. His hair is just like it appeared back in the '70s, though the bottom edge of the piece comes down lower than the head - a little too low, really. It looks like it was designed for a larger head, which is distracting. The red and blue used for his costume are vibrant, but the gold star on his chest and back get lost against them unless the light is hitting it right - perhaps yellow would have worked better? It's what the comics used, even for his Nega-Bands. The figure gets separate pieces for his bands, which is a better choice than just painting them.

King of the Inhumans and member of the Illuminati, Blackagar Boltagon possesses a uniquely destructive and immensely powerful voice capable of leveling 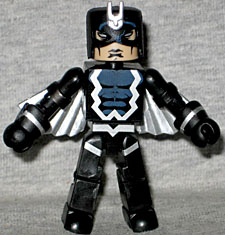 whole cities with but a whisper. Now the leader of the Kree empire, his voice powers a vast interstellar armada.

That's the second Minimate mention of the Illuminati, so we'll skip the jokes this time. Black Bolt's costume has always been graphically interesting, so it works well as a Minimate. It's mostly black with big silver stripes, but there are lighter patches on his chest and forehead to show highlights. He has his "tuning fork" on the front of his mask, and the eyes line up nicely with the eyeholes. In order to create his wings, Art Asylum designed new pieces that attach to the arms, so they're clearly wings and not a cape. Clever, that! And because the wings slip up onto the bicep area, you can still bend his elbow without him looking weird.

For the longest time, I only knew these figures from their roles in the Skeleton Lords set, but it turns out they're pretty good even on their own. Captain Marvel and Black Bolt don't really have anything in common, so it's not clear why they were paired for this set, but that doesn't make them a bad offering.