Rustin's Spoils of the Week #77

I wish I could say that things are starting to heat up now on the toy aisles with the Holiday season quickly approaching - and let's tangentilize here for a moment, I understand "business" and capitalism so it's never really bugged me that Christmas stuff started encroaching life in November, but is October really necessary? I saw two Walmarts that had more space dedicated to Christmas than to Halloween! Now that is wrong! De-tangentilizing though, there just never seems to have been the traditional late summer/early fall slump in releases - it's just been a steady stream. Which is nice, but it really risks falling behind (man, I need to get those Hobbit figures!) at best, and utterly depletes the wallet at worst. Maybe I can give friends'n'family the gift of growing my collection this December... maybe I could dedicate shelves to them in honoriarium rather than getting them gifts. People like that, right? That's a thing normal folks are in to... like donating to museums and such? 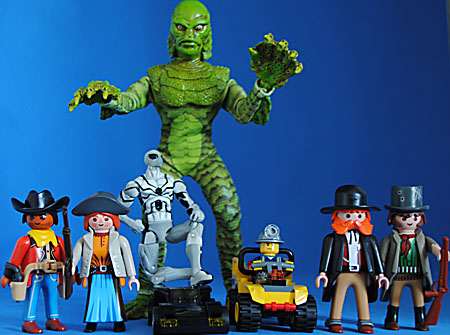 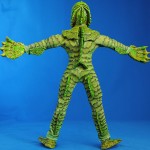 Huzzah! The first and likely only "Retro Cloth Figure" (read: Mego knockoff) I've ever been excited for! Sure I have a handful of DST's Trek ones and all of Bif Bang Pow's Twilight Zone dolls but that has always been more for the property than the figure - it's just an aesthetic I do not nor will ever "get." This dude on the other hand, is just awesome. Beyond being my most beloved Universal Monster the Creature's perfect design and scaly features just lend themselves excellently to various interpretations and I love what DST did with this guy. Not wearing clothes he's been notoriously difficult to doll-fy but this printed cloth jumpsuit mixed with the additional sculpted elements knock it out of the park. Gillman's head, hands and feet are unique new sculpts and are quite excellent, but he gets more than just that. 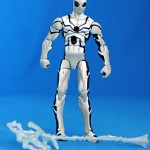 This has been quite the squirrely figure to find. As a costume, I like. It's fun and a visually interesting riff on the Spider-Man design plus, more importantly, it fits in with an established team/collection (the FF boxset). This is repaint figure to be sure but at least its a decently articulated one that finally moves Spidey away from the mediocre sculpts of MU's first year. Sadly, though, the articulation is a bit clunky so it's hard to get a good "generic pose." The paint is about on par with MU, so it's passable but with room for improvement. The gray shading is annoying and almost as bad as the blue shading that seems to haunt Venoms and Black-suit Spideys. He comes with a pearlescent re-issue of that unintelligible mess of web. 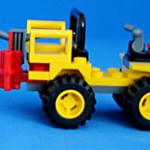 I must confess that I really dig the new "Miner" theme from Lego, but it just doesn't fit in anywhere with my collection so I'll just have to content myself with these few polys. This one is certainly less appealing than the Dozer but it has some nice pieces and great accessories. The white hazard cones are a fun idea (and can be toted around in the back of the ATV) but it's the dynamite and jackhammer that really make this special, plus he comes with the cool miner hat. I really, really like the minifigure. Good color combinations and the safety harness/back brace/tool belt deco is great. It's not the greatest set ever but it is everything a polybag should be - this is a perfect stocking stuffer for any kid out there. 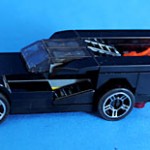 Oh man have I been worried this one would not make is to the States! I still desperately lament us never getting the Micro PotC Black Pearl and securely have my fingers crossed for the Avengers Quinjet, but this is pretty much a must-have. I'm really impressed that they found how to do a micro Batmobile that is so aesthetically simple yet so immediately identifiable! There some clever brick use at play here to achieve the look and more importantly it's both a simple and fun build. The only thing I would have preferred would the use of a stud-less black 4x4 flat for the canopy rather than the 2x1 smokey translucent pieces (and the chassis is built off of a yellow brick, which is annoyingly slightly visible on the sides) but the beauty of Lego is that it's easily correctable/customizable. I found this guy at Target in the Christmas section, so be sure to get yours before it disappears, I'm sure this will be a hot one! 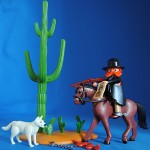 Playmobil is a German company and tends to release items in Europe about a year before the US, so it's like a window in to the future. I was utterly ecstatic to find that they decided to bring back my beloved Western theme! I've started off with the smaller sets but you better damn well believe I'm going to collect the entire line. This first, semi "starter" set is the classic Old West Sheriff. He's a great new figure and sports a black overcoat (oh how I've been lusting for Cowboys with these ever since they first showed up with the Ghost Pirates a few years back!), though I must confess the bright orange hair and mega-moustache are a bit... un-Sheriffy for me (but good news is that the hair and beards are all swappable, not unlike with Legos). He gets one of the new horses, which I didn't like at first but they are growing on me and I actually like it looks quite good now. The classic "chess piece" style is awesome but I must confess these more detailed ones fit better with the more modern aesthetic. He gets a big Saguaro cactus, with several small cacti near it. There's also a rattle snake and a dog, who is articulated at the legs and neck. More importantly though, the Sheriff gets handcuffs and the new double-barreled shotgun plus a phenomenal new wanted poster! The poster is easily held, though I don't see anyway to hang it from a wall, tree or cactus though. All in all this is a very good set. It is, though, more of an add-on since there isn't a whole lot of story to play out here as is. 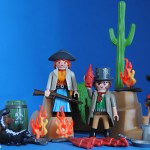 This set is amazing. Why don't you own it? Why are you still reading this - run to TRU, or your local Playmo-vendor, and buy this now!!! Three figures, a mini-environment/playset and so many accessories it can cause total disillusionment with American toylines. The three outlaws are fantastic and each is totally unique and identifiable. He get an haggard fellow in a tattered overcoat and shot-up top hat (look familiar? He's on the Sheriff's Wanted poster! Awesome touch!), we get a dark-skinned cowboy in a bright get-up and an utterly fabulous female figure. I dig this set a lot because it's Playmobil at it's best - i.e. suggested but not dictated stories. Are these three a gang, or is this Annie Oakley rescuing a capture cowboy from a sinister bandit, and so on. They gang a sandstone cave in which to camp out by, hide in or blow up. Playmobil of late has gotten a little lazy and most caves have just been hollow, but this one actually has a specific inner wall - it's a small but aesthetically major detail. The there's the accessories... man oh man. A double-barreled shotgun, a Winchester rifle, two handguns, a gun belt, a skillet, a pitcher, two cups, four bundles of sticks, three flames, a bunch of dynamite a crate for said dynamite and an awesome new barrel with removable lid (a flame can even fit in it's peg hole). This set is truly and completely Playmobil at it's best, and combine with the Sheriff set and you get play/diorama possibilities to no end. Seriously. Seriously - you need this set. If you have kids, they need this set. PLAYMOBIL FOR LIFE!!!

This entry was posted in Hasbro, Lego, Playmobil, Rustin's Spoils of the Week and tagged Marvel Universe, Spider-Man, Universal Monsters. Bookmark the permalink.

7 Responses to Rustin's Spoils of the Week #77