Rustin's Spoils of the Week #78

This week brought me back to "Sweet Home Chicago" - my favorite city in the world and most beloved former location of my residence. As such, I was afforded the opportunity to return to some of my favorite haunts, including the Legoland Discovery Store up in Schaumburg! 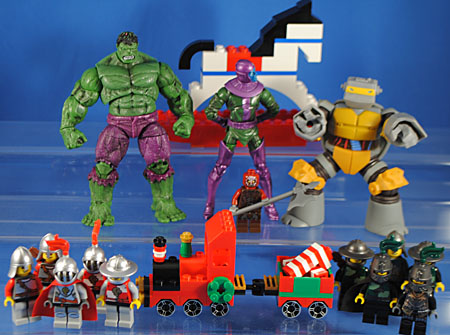 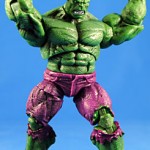 Huzzah! I've been looking forward to to this guy for quite a while. It seems he's been more easily available in the (pointless) two-pack with First Appearance Wolverine, but who wants that figure anyway? I was content to wait for the single-carded release. This is a great resculpt and is infinitely better than the old/original MU Hulk. Excellent texturing, a great head and some really good articulation - particularly the double-hinge knees and balljointed ankles. His bulk limits the posing, but not in a way that significantly reduces this guy's coolness. The only complaint I might have is that balljointed wrists would be preferred to the swivels but it's not a big deal. If you can find this guy - get him! 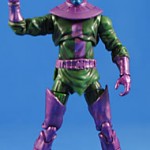 This is the year of Kang! First we finally get a minimate of him and now he debuts in MU, and this figure is certainly one of the better entries in the line. His costume is more than just the standard catsuit so he's already got a leg up on most of the line, and here is a nice kitbash with a few new pieces to make him look far more unique that he probably is. The highlight is, of course, the head - a fantastic sculpt, both in detail, accuracy and realism (a lot of MU has been plagued with... lackluster portraiture, shall we say) and I've always just dug the blue face of this guy. He also gets a rather cool new techno-gun. It's hard to stay excited for this line, with the high price point and general okay-ness of the figures, but these two are certainly great additions that keep me hanging on for more. 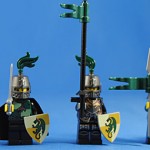 Upon my first visit to the Chicago Legoland Discovery Center I saw these two armybuilder sets, and while I was very tempted I hadn't yet decided to be "all-in" for Castle and passed on them, then promptly never saw them again. Thus, imagine my shock and delight to find them there once again two years later! This set represents the villainous Green Dragons and we get a nice hodgepodge of soldiers. There are two identical Footmen, a Guard and two Knights, one in a cape and the other with chest armor. The latter is the real star of this set - his torso is fully painted with four gold chains holding his mail in place but the familiar torso armor is also done up in awesome paint, complete with two gold dragon heads near the shoulders. This is absolutely going to be my Dragon King! All of their armor and helms are cast in metallic dark gray and they come with a nice cross section of weapons, all of which are interchangeable of course. It's a great set for diorama builders to be sure! 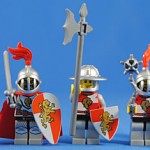 As with the Dragon set, we get two Footmen, a Guard and two Knights. I love this slotted-face type of helm and am quite happy to see it here in double. It is a bit weird to see it on two such different figures though. We get two of the torsos repeated twice and one unique, as it should be with any good armybuilder set. I really like the flat-brimmed helm, and am sorry that we only get one hear as opposed to two as with the Dragons, but such is life. We also get a whole array of weapons, including the tall axe and two of the larger shields. This set is pure armybuilder through and through. I debated long hard about getting two of each but ultimately decided against it for cost. These ran $15 a piece, which is a great deal and runs right on track with the "$3/figure" rule that seems to be consistent across the board. These are great, great sets and just a heck of a bummer than Lego can't do stuff like this with licensed product. 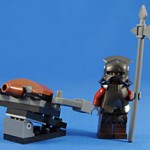 Ever since this was first unveiled I knew I needed as many as I could get my hands on! I didn't think this had even been released in the US so it was a treat to find him mixed with a giant bin of other Polys. He comes with a quaint mini-ballista (toys seem to argue that the Uruk's had a lot of ballistae with them at Helm's Deep but I don't recall ever seeing a single one) with a finger/flick launched arrow. It's frankly an unnecessary and useless build but at least there are some good bricks here. The reason to get this is, of course, the mini-figure - Saruman's Fighting Uruk Hai!!! The Uruks in Fellowship of the Ring and The Two Towers are easily the best mass baddie since the Stormtroopers and one can never have enough of them. This guy gets a fully painted torso with FotR style armor plus the generic chest armor and specific Helm's Deep helmet new to this line, and the generic tall axe as a weapon. Best of all he comes with two faces - snarl and roar. Sadly, despite the excellent torso and face paint the figure just ends up looking bland when fully armored. I need as many of these as I can get (10,000 in fact, if memory serves) but at $5 a pop that just isn't going to happen. I'm very, very happy that they put this guy out as a battle building poly, but between the bland armor and unexciting build this is certainly one of the lesser poly's in recent memory. 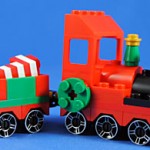 This, however, is a phenomenal polybag set! It's an incredibly fun build with lots of bricks and steps. In fact, this feels more like a small set than a poly bag, it's great! The colors really pop and scream Yuletide. I just wish there was a reason for me to buy multiples - it's just that fun of a build and cool of a set. It has an awesome balljoint connecting the engine to the car which I haven't seen much or at all before. The only weird thing here are the two over sized candy canes for the car. I would have preferred the same volume of bricks be used to make small, bright presents - in fact... I think I'll do that on my own, and maybe get a second set to make a longer train! This is really, really great and I wholeheartedly recommend it to everyone! Unfortunately, so far at least, it looks to only be available of Lego Stores, so hopefully you have one near you. 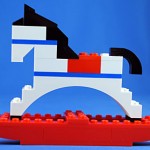 Man, oh man, the hits just keep on rolling! This is such a beautiful looking set, and much like the train is much more fun to build and cool to look at than I expected. It also includes a lot of cool bricks you don't see all that often - two big white arch pieces, four long, red under curve pieces. Plus this thing just does a great job of looking like a horse! As I I was building it I couldn't see the horse, but like a great sculpture or painting, once complete it is immediately recognizable. I just love the blue highlights too, it really helps this stand out and look great. The only downside is that is does, indeed, not rock - but that's a small complaint for something so great. Lego really, really outdid themselves this year - these are two of the coolest polybags ever, and they look great on their own and/or add up to a great display with the past ones! 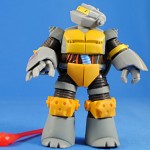 FINALLY found this guy, and boy oh boy is he ho-hum. I dig the design and it's references to the original figure and C-3PO, though I do kinda wish they'd kept the shell green (but I like that's it's made from a manhole cover). Surprisingly he has balljointed hips and knees - who'd he have *&^% to get knee articulation!? Sadly though, from there on up the figure is practically ruined. Cut shoulders and a swivel left wrist, but at least a ball-and-socket head. The right arm is given over to a play feature, but fortunately it's just a hole running through the hand and forearm - no goofy design changes. Surprisingly though the energy blast feature isn't spring-loaded at all! It launches just as hard and far as you can push it... wooooo, what fun. Oddly, his "cod piece" is cast in (not one, but TWO sections of) separate yellow plastic. It's a nice touch and adds a lot to the aesthetic consistency, one of the things I quite like about the four main turtles, but why oh why is his upper chest-shell just painted on rather than a separate piece as well? That actually bugs me a bit more than the non-articulated arms. So, overall this is a neat figure for nostalgia but it's basically lessened in the production and does not bode well for the line at all.

This entry was posted in Lego, Playmates, Rustin's Spoils of the Week and tagged Hulk, LotR, Marvel Universe, TMNT. Bookmark the permalink.

8 Responses to Rustin's Spoils of the Week #78