Now, I've been pretty open about how much I don't care about packaging at all, but I have to hand it to Mattel, this Watchmen packaging is really well done. Normally I'd rather have as little packaging as possible to keep costs down, and Scott Neitlich's grainy video didn't really do much to sell the idea of fancy packaging... but having this in hand, it's really quite beautiful. 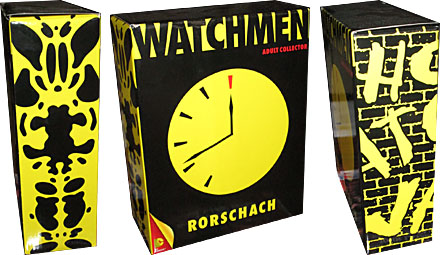 Instead of the usual white mailer box Matty's other figures come in, Rorschach comes in a yellow, black and red outer box with the Doomsday Clock on the front and back, graffiti on one side, and a graphic representation of the character (in this specific case, Rorschach's trademark splatter) on the other: 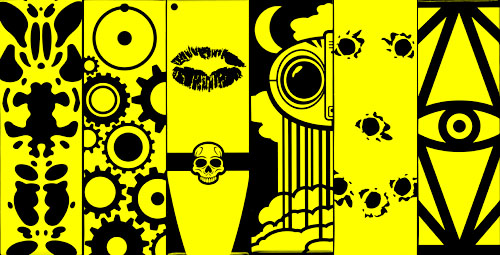 The only downsides are the lame "peel away" new DC logo in the lower right corner, and the phrase "adult collector" which is always obnoxious. But other than that, it's really striking and pretty. 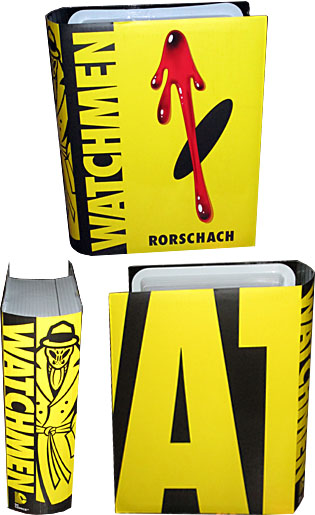 Open the box up and out comes a second package, this time shaped like a book. The front apes the cover of the graphic novel, with "WATCHMEN" running down the left side and an extreme close-up of the Comedian's blood-stained button dominating the rest.

The "spine" features a stylized drawing of the character inside: 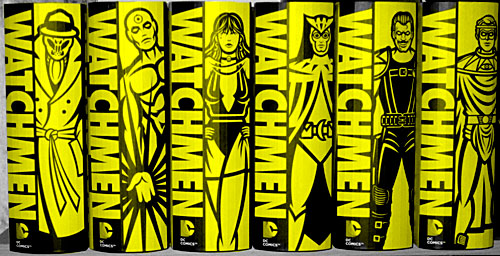 The back cover features a giant yellow letter A and part of a T. Future packages will obviously feature the rest of the letters, so you can line them up to spell out WATCHMEN. But if Rorschach is the first figure, why does he not get the W?

The order of the figures, when aligned to properly spell out WATCHMEN,

is the same as the order needed to get the "who watches the watchmen" graffiti lined up. But more than that, it also matches the order needed to have the hand on the Doomsday Clock move toward midnight (which also relates to the character's position in the overall story, from first victim to final mastermind). Clearly this was designed with purpose, so why were the toys released that way? As it is, only Silk Spectre, Nite Owl and Ozymandias were sold at the proper time.

Open up the "book" by unsnapping the two plastic trays inside, and you're greeted with Rorschach himself on the right, and a full color version of the spine drawing printed on a card on the left. 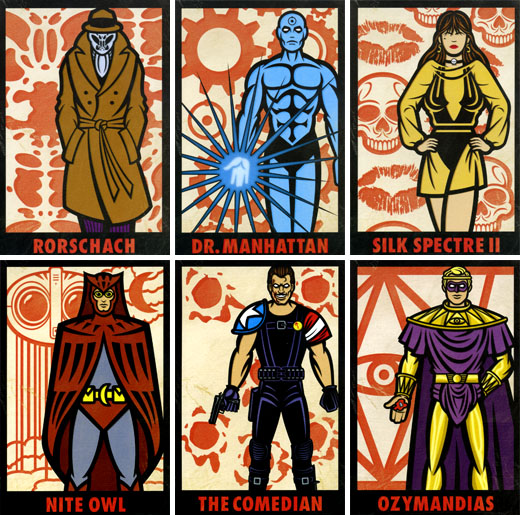 The drawing is really nice, with an altered version of the side-of-the-box graphic in the background and some bio info on the back. Maybe even too much info. In the story itself, Rorschach (like everyone else) gets his origin spelled out gradually over the course of the narrative. But I suppose the book's old enough that there's no need to worry about spoilers, and nobody would be buying these who isn't already a fan, so no real harm done. 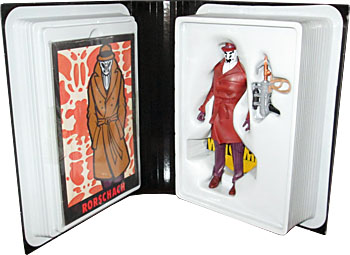 Moving to the figure side of the book/package, you'll find Rorschach tucked into the plastic tray. No blister bubble, no wrapper, totally collector friendly (although there is one rubberband around his ankles, it can be removed without messing up the package. Most of the time my toy boxes go right in the trash, but this one I'll be hanging onto; it's really beautiful. 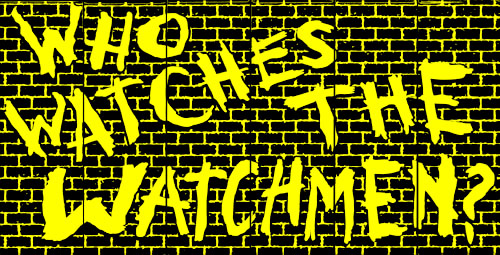 This entry was posted in addendums, Mattel and tagged Watchmen. Bookmark the permalink.