Rustin's Spoils of the Week #85

I have finally gotten off my keister and nearly completed Playmobil's new Western. I'd gotten the two smaller sets a few weeks back, and still need to get the Fort and Calvary booster but here is the bulk of the line. This is a truly magnificent return to Playmobil at its very finest. It takes historical reality and translates it through the Playmo-aesthetic and we get toyetic perfection. Gone is all the ridiculous neon colors and fantastical designs which have plagued Knights and Pirates for almost 15 years! I simply can NOTrecommend these enough and pray, pray, pray that we get more sets in this theme!!! 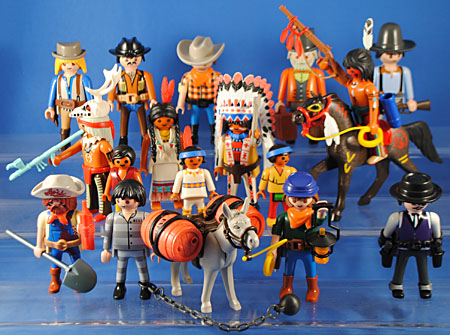 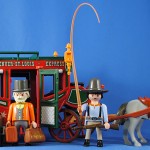 This was part of the "teaser" wave that came out in 2011, I believe. Here we get a re-issue of the "version 2" Stagecoach released in '94 now re-done in red plastic with green stickers. The windows have tied-up blinds and the doors, in-set padding all cast in light gray - they're a great touch, especially the door padding, though it can be a bit hard to pop in place. We get two figures, a driver and a passenger, and two of the new style horses (I wasn't crazy about these at first, but I'm warming up to them) along with a Winchester rifle, a whip and two hats. There are also two bags and a case to create the illusion of luggage, and not only can they fit on top of the coach, the back flap and drivers seat both flip open for storage space. Both coach doors open and the roof is removable for easy play access. This is a good set, and a very iconic presence for any Western themed playing. I would have preferred a couple more pieces of luggage and/or a second passenger but it should be easy enough to plus it out with other sets. 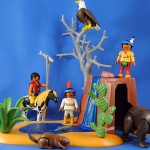 I am obsessed with Playmo-water and this may be the best execution yet! The waterfall is fantastic but the pond is unbelievable. Despite its small size the water goes from ripple, at the waterfall, to flat, to undulating (as if it were deep) and the effect is great! Plus, it's cast is a dark blue translucent plastic that really helps sell the effect. There are two curved grooves that the fish can be pushed into and the boy's forked spear can fit in to remove them easily. It's a "play feature" I was dubious of but actually is fairly impressive. We get three Indian kids, a bald eagle, a bear and a gol'darn beaver! I really like how they handled the "cave" in the waterfall, it's there for play value but it can be hidden from most angles so as to not ruin the aesthetic. I should also note that this is a remarkably clever "re-paint" of a portion of the big Stone Age set. 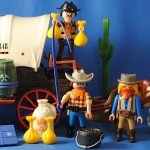 OH MY GOD - This is awesome!!! Where even to start!? It's an all-new sculpt with some great wood grain textures to it. The main cart area has a raised floor allowing for two hidden compartments but even cooler, it has space for a fifth, spare wheel - how's THAT for realism!? The cover has some holes in it, which actually fit the new arrows for awesome "under attack" options. The driver's seat sits on two suspension springs that do actually have some bounce to them, and the whole section flips open for storage, but to not be outdone by the fifth wheel, the seat back has two prongs to actually hold a rifle back there for quick access! We get four rifles, a rifle case, four bags of gold, two barrels, a sack of grain, an awesome kettle, a section of rock with cactus and half a dozen six-shooters! There's three of the new style horses and not one or two or three but four, four figures! They're all great but I am in love with the purple-vested bandit! Everything about him screams Lee Van Cleef-ish badassery! I am absolutely planning on getting a second set, the wagon is fantastic and I need a second Van Cleef to put a black duster on. If you get only one (and why would you only get one!?) make it this set - it's a brilliant set and you can make a complete story out of it! Everyone needs this! 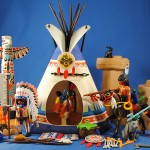 This is set is really cool, though it risks disinterest by being a bit bland. There are four figures (plus a baby), and while you get a Chief, a Shaman, a woman and a man there's not really any implied stories here. I just can't help but feel like it's missing something. The centerpiece is the classic teepee with new printed details on it. It's a thick cloth-like material, same as the sails from Pirates, and though it's a bit of a bear to assemble it is surprisingly secure once everything is in place. We also get a wicked cool totem pole and a big chunk of rock-work. The rock is great, but it's frustrating that it's not in the same reddish brown as the Gold Mine and Pond... it's the one thing keeping the whole line from being a cohesive whole/location. Despite my whining this thing is loaded with accessories including a ham shank, six arrows, two flaming arrows, a bonfire, a bunch of weapons and bowls and stuff, but most fantastically... a fabled "peace pipe." Playmobil for the win! This is just such a cool line. This is an expensive set so I don't think I'll be getting a second one, but fortunately there is a SuperSet out there that includes a smaller teepee to help build out the camp. 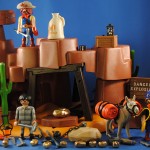 The original Gold Mine from 1994 is a "holy grail" of mine so, while I still very much want that one, I was very excited to see an all new one! And... jeans'n'beans, kids, its fantastic! It's darn big too, hence it won't even fit in the photo (or my photo box)! On the backside of the "shanty" are some nice in-set rock pieces for mining but I'm pretty bummed that it's designed to be an exterior on the back. Included is a new-style donkey to which you are encouraged to strap barrels of explosives to! Oh how I love you Playmobil. You also get three awesome figures - a Prospector covered in dirt/mud, a guy who looks like he mines all day and plays cards all night and an awesome Prisoner! I have no idea why we get a prisoner here, but it certainly offers a lot of play options! His ball-and-chain chain is too long for my tastes but what you can do, which is awesome, is remove the ball and affix it to a rock via a small peg! In fact the set comes with seven variously sized large rocks (not pictured) which you can pile on top for a "cave in" play feature. Included is a veritable slew of great accessories, including a light-up lantern on a box, and a bunch of ridiculously oversized gold nuggets. There's an awesome minecart which can be pushed along the track too.

5 Responses to Rustin's Spoils of the Week #85