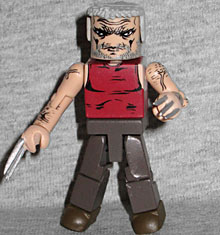 Fifty years from today, the man formerly known as Wolverine is but a fragment of his former self. Beaten down by the villains of the world, Old Man Logan lives a pacifist life with his family and avoids trouble at all costs... until he's finally pushed too far.

This Wolverine, #30, is nearly identical to the one in the Wolverine Through the Ages box set. The only differences are that he's not wearing a coat (and thus has new bare, hairy arms) and his waist piece doesn't have painted pants details. He still has his claws out, even though that goes against the story. Can't really blame them for that, though, because a Logan figure that's just Logan would be boring.

One of the only surviving members of the Avengers, the blind Hawkeye 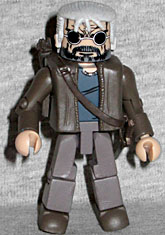 is still just as deadly as he used to be, especially behind the wheel of the former Spider-Mobile. Now he enlists the assistance of Logan as he traverses the country in hopes of reforming the Avengers.

Perhaps the reason Art Asylum went with a re-release for this set is because of how expensive creating Hawkeye would be. The intervening decades have not been any kinder to Clint Barton than they were to Logan, and he's now blind from glaucoma. His long gray hair is pulled into a ponytail, and his face is wrinkled and scruffy. He's wearing civilian clothes, which might seem like a moneysaver, but his jacket is a new piece that's unlikely to ever be reused: 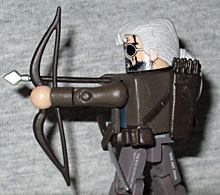 it's molded with a sash over the chest and a quiver of arrows on the back - who else could ever use such a thing?

Hawkguy comes with the same bow as before, and four arrows. Why four? It's not like they fit in the quiver, and it's not like there's some story signifigance to them. They're just there. He's also got a katana that fits in the loop on his jacket, because the guy is good at murdering.

This was the seventh series of TRU-exclusive Minimates (counting the two Wolverine movie series), and yet this was the first exclusive two-pack I never found in stores. I may not have bought all the other ones, but at I saw them, you know? I ended up having to pay secondary market prices years later, which is annoying. The Logan in this set is superfluous if you already have the box set, but Hawkeye is a winner.