Created by Ultron, the android called the Vision can communicate 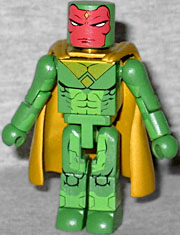 with most computer systems. He can also alter his molecular density to pass through objects or become impenetrable.

There hasn't been a Vision Minimate since Series 20, and when we reviewed that one two years ago, Rustin expressed his surprise that there hadn't been an update. Good thing he's about to be in Avengers 2: Dawn of Justice! This new Vision is in his "Marvel NOW!" costume, which maintains his green and yellow colorscheme. He has a golden cape, which is supposed to blend into the golden triangle on his chest. He has two tones of green - dark on the outsides, with a lighter panel in the center of the torso and around the shins. He's also got the appropriate light patches on his arms, but they're hard to see. His hands should be the same red as his face, not green.

So that you can play like Vision is going intangible, the set includes an extra set of arms and legs that have been molded in clear plastic and then given a little bit of green paint over that. Someday, someone will come up with a way to portray a phasing character in some way that doesn't confuse the ability with "invisibility," and on that day, the world is going to change forever. Well, "the world" of toys, at least. "The world of toys" based on characters who can phase. So Vision, Shadowcat, and... Martian Manhunter? Yeah, them. Anybody else?

Hey, speaking of characters who are only getting much-needed updates because of 2 Fast 2vengers, "Quicksilver." 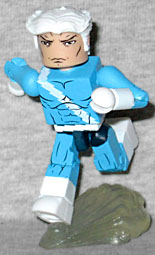 Pietro Maximoff is the son of Magneto and brother of the Scarlet Witch. His mutant speed power allows him to reach Mach 10, and he has been both an Avenger and a member of the Brotherhood.

His only other Minimate appearance was in Series 16 in 2007. The face is much more detailed now, and he gets white hair with those silly wings sculpted on. This is his classic blue costume, with the white lightning bolt across his chest, though this time he gets his dark blue trunks. We've come a long way, baby! To show off his speed, he comes with a clear "dust" base.

The pending release of Avengers 2: Rise of the Silver Surfer may be the only reason we got these Minimates, but who cares? We've gotten several updates of Scarlet Witch, so it's good that we finally have her husband and her brother to go with her.