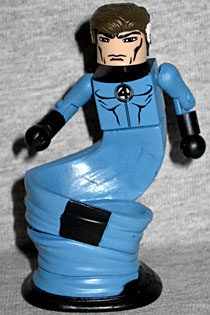 Reed Richards, one of the bravest adventurers and most brilliant scientific minds of his generation. While attending State, Reed met fellow student Victor Von Doom, an egotistical and unstable genius who refused Reed's offer to room with him. Doom pursued a rivalry with Reed, trying to prove himself the superior intellect.

Reed is done in the same colors as his wife, appropriately enough. He's nice, but not significantly different from any of the Misters Fantastic who came before him. He does have the nifty "stretch attack" replacement legs (as you can see in the photo), so at least he doesn't have to be plain. Still, as far as Reed Richards goes, this isn't a very exciting one. But on the other hand...

While at State, Victor Von Doom's greatest invention was a machine designed to rescue his mother's soul from the netherworld. Richards tried to warn him of a flaw 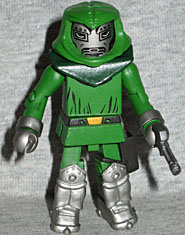 in his calculations, but Doom was too proud to listen. He activated the machine and it exploded in his face. Expelled for the explosion, Doom sustained only a few facial scars, but believed his looks had been ruined, and Dr. Doom was born.

This is the third Dr. Doom Minimate, and it's unlike either of the previous two. In his first appearance, Doom was still wearing green clothes over silver armor, but the design was more medieval than it would eventually come to be. He wears no cape, and Moon Knight's hood is larger and floppier than Doom's usual. He's wearing a dark green collar, and his shirt has sleeves for a change. He has a short skirt with a painted belt, a leg holster for his Battlestar Galactica gun, and shin guards from Ares. That's not what his boots looked like in his first appearance.

Also not seen in his first appearance? His face. While the original Dr. Doom Minimate had a chase variant that showed him unmasked, this one comes with a second head. He looks a lot like Deadpool, but the burns and scars are only applied to the front half of the head. If you take off his collar, there's a fancier one painted on the chest.

Reed Richards may not be very impressive, but he's not a bad toy. Still, it's clear that Doctor Doom is the real draw of this particular set.