You probably didn't notice, but we've been reviewing all these Sugar Rush toys in a specific order: using the grandstands shown in the packaging, whichever one was first in line told us which toy to review next. That's finally failed us, because apparently nobody cheers for Candlehead. 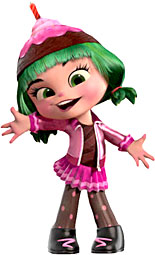 Candlehead is a riot who's is able to laugh at herself-even when she's the butt of the joke. Hypnotized by the flame atop on her own head, She get lost in a haze of Happy Birthdays. Sugar Rush and its daily races wouldn't be complete without Candlehead, but she's a few scoops short short of a sundae.

Remember when we told you that Minty Zaki stole

her name from another Sugar Rush racer? This is that racer. There are several clues pointing to it: her concept art mostly resembles the final product, just with a green jacket instead of pink, and black chocolate chips in her green hair. And the same line of scented plushes in which Minty smells like apples? Candlehead smells like mint. The grandstands where her saltwater taffy fans sit say "Minty" at the top, and the storybook done by the design team calls her Minty as well. So basically, "Candlehead" is really "Minty Zaki" and Minty Zaki is... whatever name you make up for her. 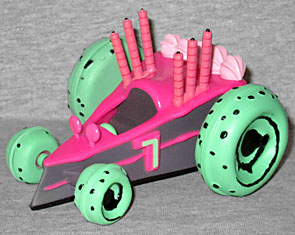 If the Candy Kart is the same model as the Tira-Missile, then Candlehead's Ice Screamer is the same as the Cherriot: it's a simple wedge of dessert with ice cream wheels, scaled up to the point where a driver can sit in it. Yes, this is a piece of birthday cake rather than a piece of pie, but it's the same. Judging by the colors, it's a chocolate birthday cake with pink frosting, and mint chocolate chip ice cream wheels (again going back to the fact that she's supposed to be Minty Zaki).

The wheels aren't as detailed on the toy as they are in the movie, 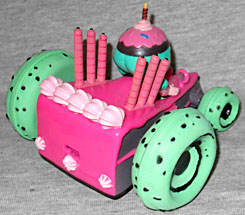 but that's fine - it would be crazy to expect them to mold the super-pitted look of real ice cream. But they did sculpt all the chocolate chips on the tires, and that's pretty impressive in itself. There are sculpted fudge swirls around the hubcap, too. Six candles poks up from behind the driver's seat, like flaming exhaust pipes, and the big number 7 on the sides of the car are the sort you often see on kids' birthday cakes (typically between the ages of 6 and 8). Lighter pink icing is piped along the edge of the cake and three dots in the back. Surprisingly, there are silvery paint apps on the mirrors. 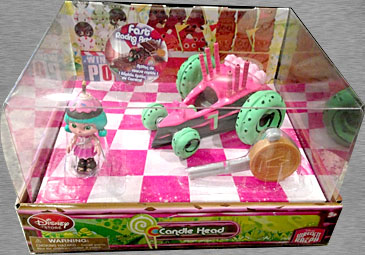 the toys well. The entire top is clear, allowing full views of the car and the figure (as well as the golden coin key). The bottom of the display is pink and white checkerboard, showing the start/finish line, while the back shows some of the grandstands - the peppermints that want Adorabeezle Winterpop to win, the candy corn that roots for Gloyd Orangeboar, and the the teddy grahams that pull for Crumbelina Di Carmello. This is a really lovely display, perfect for MOC collectors.