After Mulan, it took 11 years for another Princess to be added to the official lineup - not the longest gap ever (that still belongs to the Aurora/Ariel jump), but it shows how Disney's priorities changed after the '90s Renaissance was over. It's not like Emperor's New Groove or Meet the Robinsons had princess characters, right? [#WheresKida #JusticeForKida --ed.] She's the second American Disney Princess, and the only one to exist after the Industrial Revolution. She's also the only black Princess, 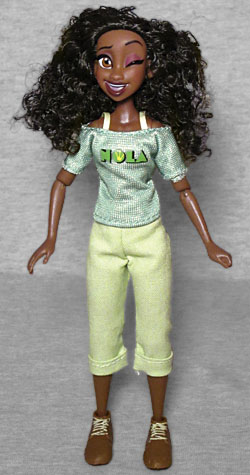 which caused problems when the CG animators made her look less like a black woman and more like Belle with a deep suntan. She wasn't the only one, either - all the POC Princesses faced complaints that they'd been homogenized (ie, whitewashed) by the change to CGI - but Tiana was the most blatant. Fortunately, Disney listened to the complaints and fixed her before the movie released.

These dolls seem to use the updated designs, so Tiana's skin is the color it's supposed to be, and she doesn't have the same little nose as all the white girls. In her own movie, Tiana mostly wore plain, subdued colors, to reflect her boring workaholic personality; after turning into a frog, she began to lighten up both figuratively and literally. Comfy Tiana is wearing shades of green, of course: her shirt should really be more of a crop top, coming down farther off the shoulders and exposing a bit of her belly, but they did get the visible bra straps this time. Her jeans are a honeydew or tea green, while her shirt is sort of a light pistachio. The logo on the shirt reads "NOLA," for literally no other possible reason than she's a fan of WWAC, and there's an icon in the center of the O that at once manages to look like both a crown and a frog's footprint. It's the font from her movie's poster! Another potential look would have seen Prince Naveen's smiling frog-face on the center of the shirt, but making it about her hometown rather than her boyfriend is a better choice. 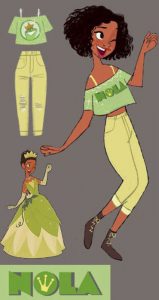 All the Comfy Princesses have the same joints: balljointed head, swivel/hinge shoulders and elbows, swivel/hinge hips, and knees that are ratchet joints inside a rubber sleeve, making the legs seamless. Rubber ankles mean they're very hard to stand, though. The hair is rooted, and shaped to match the style seen in the film; she's got her natural curls creating a great mane behind her, what people more knowledgeable than me call "C3" hair. (It doesn't have anything to do with knockoff Legos.) She's sculpted with a massive smile and one eye closed in a wink, duplicating a pose seen in some of the promo artwork but not in the movie itself. The hair should probably be shorter to really match the animated character, though.