but it was only credited to Sleeping Beauty because that movie was in production at the time, and it served as good promotion - it was originally going to be Snow White's! And yet Sleeping Beauty was a financial disappointment when it was released in 1959, which is why Disney took two years off from doing animated movies (before returning with 101 Dalmatians).

Aurora gets short shrift in her own movie, getting only 19 minutes of screentime and 18 lines of dialogue - seriously, after the 40-minute mark, she never talks again. Even in Wreck-It Ralph, she doesn't have a lot to say, mostly spending her time lounging around - thus this big "Nap Queen" logo on her loose, stripey pajama top, which... is that a "trap queen" reference? In a Disney movie? Really? Her shirt, headband, leggings, and shoes are all various shades of pink - the animators in the '50s couldn't decide on whether her princess dress should be pink or blue, which is why there's a running gag in that movie of the fairies changing it back and forth. This doll is missing the white tank top she wore beneath the shirt, just leaving her shoulders bare. Because she's still sleepy, she comes with a coffee cup accessory. And unlike Cinderella's glass slipper, it can actually be held without being tied to her hand. 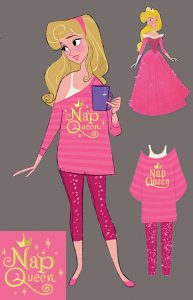 All the Comfy Princesses have the same joints: balljointed head, swivel/hinge shoulders and elbows, swivel/hinge hips, and knees that are ratchet joints inside a rubber sleeve, making the legs seamless. Rubber ankles mean they're very hard to stand, though. The hair is rooted, and shaped to match the style seen in the film. In Aurora's case, that means some gigantic curls that look old-fashioned, but don't really line up with anything seen in her original film or this one. What's the deal?