As revealed in today's review, Soldier 76 began life as a comic character. 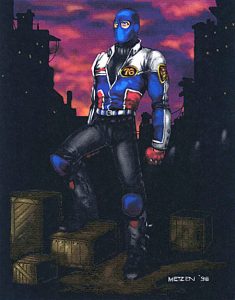 (Can you tell this is an OC created in the '90s by a 20-something white dude? He's basically "what if Captain America, but also the Punisher?" And dig that Corel Draw coloring technique!) 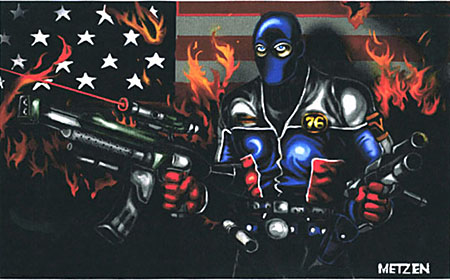 Here's what Chris Metzen had to say about his character on the now-defunct "Sons of the Storm" site:

The American dream has become a nightmare.

A dramatic rise in terrorist attacks executed on US soil erodes national confidence in the Federal Government's ability to maintain order and security throughout the country. Extremist militant groups, both foreign and domestic, strike at US holdings with seeming impunity. The Federal Government's inability to directly counter these threats begins to chip away at the cornerstones of national unity.

The seditious debate over how to respond forcefully to the rising crisis begins to fracture the tentative fraternity between the Federal and State Governments. The increasingly sensationalist media-bloc fans the flames of public paranoia and discontent.

Local governments, unable to stem the tide of the growing anarchy, turn to the Federal Government for a final solution. Martial Law is instated across the land as Federal armed forces move in and quickly take control of thirteen eastern states. The massive police action quickly spirals out of control as numerous guerilla militias rise up to spread terror and destruction up and down the East Coast.

Outraged by this unprecedented Federal action, and driven to circumvent similar events in their own territories, a number of central and western states declare their intentions to secede from the union. In a final bid to keep the nation from fracturing any further, the Federal Government sends its troops into the heartland of America to restore order at any cost.

Essentially, the character - S:76 - is an old super soldier (there was a whole series of them - though the term "super soldier" will likely never be used). These guys had special microchips implanted in their brain stems that regulate their autonomic systems - giving them sporadic boosts of speed, endurance, aggression and strength. Anyway, 76 was left behind on a botched assassination mission over thirty years ago. Wounded and alone he has wandered the seedy back alleys of South America as an amnesiac ever since. The government has presumed him dead all these years.

While he was away, America devolved into a war zone. The nation (for a number of reasons - rampant domestic terrorism being a biggie) lost all sense of itself as the Second American Civil War erupted between the Federal controlled east and a loose conflagration of western states. The country is in chaos. Race riots and worse are erupting in every major population center. Things are not good.

As fate would have it, our hero finds his way home to a very different America than he knew. Still suffering from amnesia, he must attempt to come to terms with his shadowed past in order to chose the right side to fight for.

While one preview story did come out in 2004, no other progress was ever made, so Soldier 76 was free to be reimagined for the game. 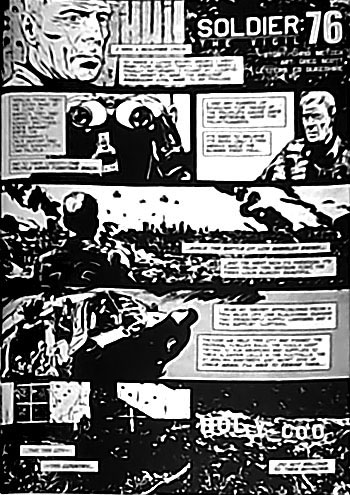 This entry was posted in addendums, comics and tagged Overwatch. Bookmark the permalink.