The Watch is Over

Bad news, Overwatch fans! According to Entertainment Earth, the third series of Hasbro's action figures has been cancelled: 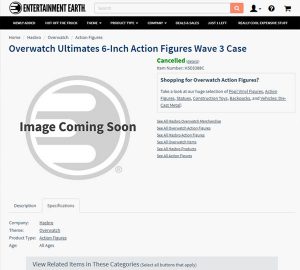 The assortment would have included refreshes of Tracer and McCree, normal versions of D.Va and Reaper, and a repainted Mercy. No pictures were ever shown, but the D.Va mold at least showed up in that GameStop four-pack.

Hasbro has been completely silent about what's going on with the license, but the piles of unsold figures at both GS and Walmart probably give us a hint of what went wrong.

This entry was posted in cancelled toys and tagged Overwatch. Bookmark the permalink.