Peter Parker at one point had enough of being Spider-Man. So, he brews up a chemical cocktail intended to terminate his spider powers. When he wakes 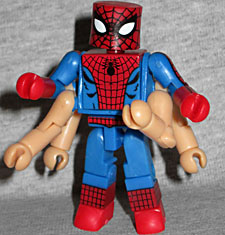 up after drinking the mixture, he notices a ghastly thing: he has six arms! The potion increased his spider powers rather than nullifying them!

Smooth move, Parker. This figure is basically just a normal Spider-Man Minimate with the addition of four extra arms, which is terrific for those of you who didn't get or didn't like Series 24's Classic Spidey. The bonus arms are on a frame that wraps around the underside of the standard Minimate torso, so you can make him look normal if you so desire. The addition of all that superfluous plastic pushes the arms out to the sides a little, so they tend to pop off easily. The figure comes with a coiled webline of the same sort Spidey-mates have been coming with since the beginning.

Curt Connors was a gifted surgeon who went into a war to help his country, but his arm was injured in a blast and had to be amputated. 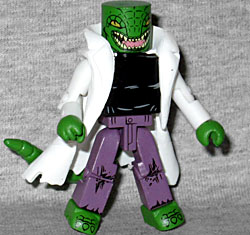 He later became obsessed with uncovering the secrets of reptilian regeneration, and created serum taken from the DNA of a reptile. Connors ingested it, and his arm did indeed grow back. Unfortunatley, it had one side effect: Connors was subsequently transformed into a reptilian monster!

It makes sense to include the Lizard with this Spider-Man, because he was involved in the story where Spidey got the extra arms. But this is "Silver Age" Lizard (aka "First Appearance"), and that was a Bronze Age story. Calling this Silver Age Lizard is smart, though, because it excuses the flatness of his face - that's the way Ditko first drew him. Lizard gets the clawed Minimate hands, as well as a new tattered labcoat that also provides his tail.

Lizard's face may be unsettlingly flat, and Spidey's arms pop off the shoulders sometimes, but this is still a decent set - especially to Spider-Fans.