"Harley Mozell is hit from behind by J.T. Delacroix! And Earl Tilleson! Oh, and Buddy Rollette! And the Pecker brothers, Danny and Dell! And the ol' Grizzly himself - Weasel Johnson, Jr! Look at that carnage. We are worse than the ancient Romans!"

After updating Leadfoot, Roadbuster was looking pretty naked. Thankfully, Reprolabels has the solution. The solution, of course, is more stickers. 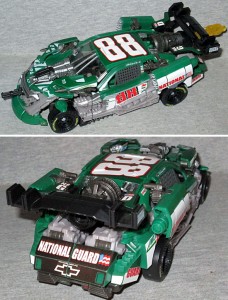 Reprolabels set M38 is $16, which is not cheap, but for that price, you get 88 stickers - hey, the same number that's on the top of the car! What a coincidence!

The change in appearance is really quite stunning, once you've got all the decals in place. The only areas that don't really get redone are the front bumper and the top of the rear spoiler. Even areas that look like they'd be fine are reskinned: consider, for instance, the roof of the car, which has a two-piece sticker to redo the large number on top; it's now the proper font and the proper color, even though no one would likely notice if they'd left it the way it was. The doors get dozens of new sponsor stickers, the AMP Energy drink logo is split up on the remnants of the hood. The National Guard and Moutain Dew get much more prominent placement, too.

The robot mode benefits from the stickers, as well. There's 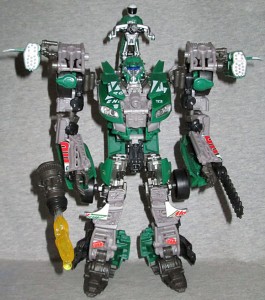 more color visible on the arms now, and the panels on his legs are no longer blank, since they're formed by the rear fenders of the car. There are stickers applied to his shins that don't actually show in his altmode, so they're the graphic design equivalent of kibble. The instructions tell you to put a few stickers on the top of his head - and since that already has a big bill that makes it look like a baseball cap, you've basically putting logos on his hat.

Some of the other Reprolabels sets we've reviewed were must-buy items, but this one not so much. The plain Roadbuster is okay without the upgrade, but he's much better with it. The change in appearance is frankly quite amazing, and I do not regret the money I spent on two sheets of stickers.

This entry was posted in blog exclusive review and tagged Reprolabels, Simpsons, Transformers. Bookmark the permalink.