As a modern-day fortune-hunter, Drake operates within a rough, lawless world occupied by treasure-seekers, antiquities smugglers, con men and thieves. Drake is gifted with a remarkable historical imagination and survives by his 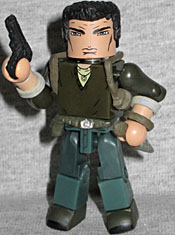 wits, tenacity and resourcefulness - and a dash of good old-fashioned luck.

Hey! I've actually played Uncharted 3! I know who these characters are! Of course, these are based on Uncharted 2, but when your character is the son of Lara Croft and Indiana Jones, it's not like there's a lot of change from installment to installment. This time he wears a green shirt! Wow! The Minimate has rings around the forearms to show us that his sleeves are rolled up, has an extra ring around his left arm to be his big leather strap watch, and finally a ring on a chain painted on his chest. It was important in the third game, so it's nice they had it here. He has a new belt, shoulder holster and black faux-hawk. He's armed with a gun, and the phurba dagger that's the central MacGuffin of Uncharted 2: The Temple of Doom. The dagger is surprisingly detailed for its small size.

Chloe is as tough and capable as she is beautiful. She's equally comfortable in a gunfight or a fistfight - whatever the occasion demands. Chloe's 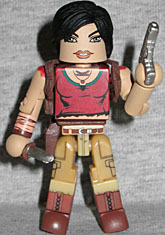 a good ally but her moral compass is uncertain, and her reckless and impulsive nature makes her somewhat unpredictable.

Chloe don't know better. Chloe is just like Drake, only beautiful. A couple of years' difference, but those lessons never learned. Ahem. Chloe Frazer is the love interest introduced in the second game, but then the girl from the first game came back to complicate things. She's wearing a torn red shirt, cargo pants (painted front and back with pockets) and laced brown boots, and has a bandana tied around her right wrist. She's a lefty, so her holster isn't the same as Nate's, but she does still come with a gun - silver, this time. She has a removable knife that fits in the sheath on her hip, but the handle bumps up against her holster. Disappointing. Especially since her belt is so neat!

Even if you've never played the Uncharted games, known for their amazingly realistic graphics and outstanding acting, these Minimates make some great civilians for your other figures to pick on/rescue.