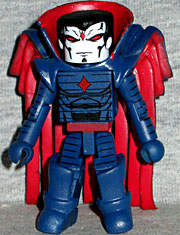 has been following the life of the X-Man Cyclops since he was a boy, and manipulating it in ways that no one could have expected.

Even though he's dark blue, Mr. Sinister's body is still painted with the black lines that signify his metallic body. He's got new boots and that idiotic massive cape of his. His face is perfectly white, with dark circles around his eyes, a black triangle on his chin and a red diamond on his forehead. His black hair is a piece we've seen before, but it's the appropriate style for him. The figure's biggest flaw is the cape: while it's molded with the shoulder pads and the collar that it needs, it's such a massive piece that it makes him back-heavy and hard to stand. If it were a little longer, you could at least use it to help prop him up, but as is, he needs help remaining upright.

A deadly, mutant-hunting Sentinel from an alternate future where 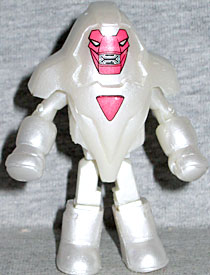 Sentinels rule, Nimrod first came back to the present in pursuit of a time-travelling mutant, and has been destroyed and reincarnated more times than the X-Men can count.

That bio tells you everything you need to know: Nimrod is a Sentinel from the "Days of Future Past" timeline. His body is pearly white, with a new head/chestcap combo that really doesn't lend itself to any future re-use (maybe a Deep-Dive Iron Man or something?) - it was clearly designed just for this figure. Art Asylum interpreted the area around his pink face as being inset, when the comics seemed to show it as raised, but the shape is identical. He has a pink triangle painted on his chest, oversized boots, and Juggernaut's gloves. He even has a waist extender to make him larger and more imposing. 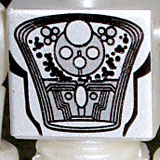 To show his robotic nature, you can remove Nimrod's chest cap to reveal some kind of strange technological detailing, as seen in New X-Men #29. It's a mix of circle, wiring and Kirby dots, which is exactly what was seen in the comic. It would have been kind of neat if his head was painted to look like Bastion (the combo of Nimrod and the Master Mold), but that may have been asking too much.