The sister of superhero Captain Britain, Braddock was recruited

by the government for her precognitive powers, which later bloomed into full telepathy. Crossing paths with the X-Men, she was recruited onto the team after surviving an encounter with Sabretooth and assisting them during the Mutant Massacre.

There was a Psylocke in Series 7 of the TRU exclusive Minimates, and now here she is again in Series 11. This time she's wearing her original costume, which was basically just pink pajamas. She uses the Storm arms to create her billowy sleeves, but it's not quite right: the sleeves should be bigger near the wrist than the shoulder (which should technically be bare), so these are basically upside down. The matching fabric on her shins is just painted on the front. This is not a costume that translates well to Minimate form.

BAMF! With that distinctive sound, a purple cloud of smoke and the smell of brimstone, Nightcrawler makes his appearance on the scene, and is just as quick to leave it. A mutant teleporter, Kurt Wagner is feared by humans due to his 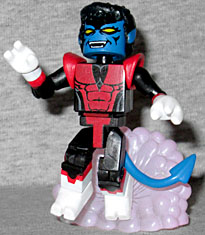 blue fur and demonic appearance, and a longtime member of the X-Men.

Every time there's a Minimate-centric "Ask DST" column on the Art Asylum blog, someone asks about re-releasing some figure or another, and every time the answer from DST is "we don't do straight re-releases." And yet this Nightcrawler is 100% identical to the one in the Excalibur box set. That's incredibly annoying. It's bad enough to end up with multiple similar versions of a character - it's even worse to literally have two of the same one. It doesn't even make sense to pair these characters together, as they weren't even on the X-Men at the same time: Nightcrawler was put into a coma before Psylocke joined, and was still recuperating when the team moved to Australia! This is dumb.

The Psylocke in this set is okay, but has enough flaws that it's not worth getting the set just for her. And the Excalibur box is a superior way to get Nightcrawler, so this pair is better left on the shelf.