Sorry for the delay - we promised this one months ago, but have never gotten around to it. No excuse: I just kept forgetting. 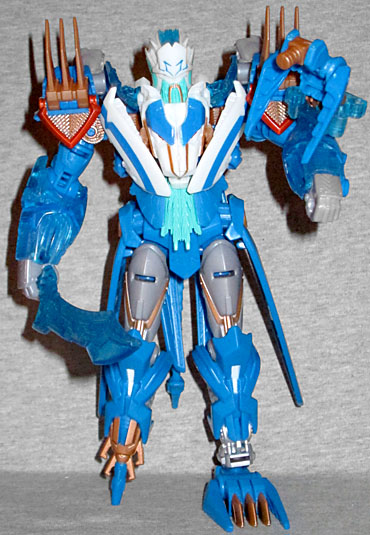 As detailed in the Transformers: Prime Thundertron review, you can turn his foot into a parrot - a perfectly logical choice for this pirate-themed character. But if you're willing to do a little more work, there's an even greater improvement to be made.

As you may recall, one of the major problems with Thundertron was his stupid, action-featurey sword. He couldn't hold it and it just looked 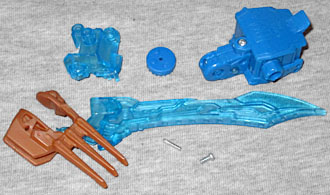 out of place on the toy. But you can't just have a pirate without a sword! That wouldn't be right! So it's time to go to work. Flip the sword over to the side with the peg, and unscrew the three tiny screws holding the translucent blue plate in place. Remove that, then disassemble the guts of the sword - there will be a spring, a gear, and a thin metal rod, in addition to the blue plate, the sword itself, the "claw" attachment and the light-up piece of junk that ruined the accessory in the first place. Just go ahead and throw that over your shoulder, you won't be needing it again. 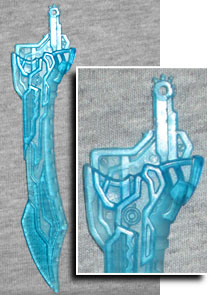 There's a hint of a handle at the base of the sword, but it's covered by gear teeth, and thus won't fit in Thundertron's hand. However, the teeth are easy to cut off, and if you do it carefully, the remaining peg will sized so the robot can hold it perfectly (if you get overzealous, you might have to wrap it in tape or something).

The trans blue plate and the golden claws are just held together by friction, so you can leave them connected if you choose to. The metal pin is the thing that allowed the sword's blade to rotate, so if you hold onto that, you can reassemble the three pieces into a single item. 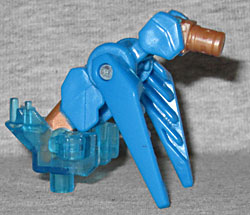 But more importantly, the interior of blue piece is the exact width of the "bird's" feet. It functions as a perch for Paw-ly the Parrot! And since it's the piece with the 5mm peg on it, you can plug it onto Thundertron securely, whether it's his arm in robot mode or his back in beast mode. How perfect is that!

Giving Thundertron a functional sword isn't as easy as giving him a pet parrot, but the benefits totally make it worth the minor amount of work it takes.

And thanks to our reader FakeEyes for discovering all this!