The CityVille: Invasion toys are sold in traditional sets, as well as 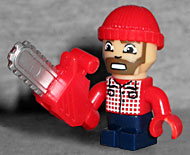 in blind-bagged two-packs. Yes, two-packs. These guys aren't the standard Kreons, they're half-sized little oddities. This set, identifiable by the serial number ending on "23" on the bag, introduces us to Steve Timber. He's a lumberjack, wearing black pants, a red plaid shirt and a knit cap. The CV:I Kreons use the normal Kre-O head, and Steve's is painted with a big brown beard and a look of surprise. The front of his shirt is painted, but the rest of him is bare. He comes with a chainsaw, which probably means we'll be seeing a Buzzer in the next GI Joe series. 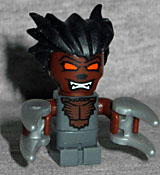 Steve is paired up with another woodland resident, Willie Werewolf, so you know why I got this set. The legs on these minis are only one stud wide [as opposed to Rustin, who's one wide stud! Rowr! --ed.] and move only at the waist, shoulders and neck - it's the Springfield Four! Willie appears to be wearing a grey bodysuit to go with his dark brown fur. His eyes are orange, and he's got a little black nose. His hair looks like they're planning a Kre-O Wolverine, and he gets claws through the use of two-pronged pieces that he holds in his clamp-like hands.

probably does something, but who cares? There's also a "sonic motion" block, which is a special piece with red rubber cilia underneath. When subjected to vibration, the block (and whatever figure you've attached to it) jostles around. It's the same level of technology seen in those old electric football games. To keep the little bristles from getting bent, the block includes a protective shell.

These Kreons aren't as much fun as their bigger brothers, but they offer some interesting variety. I only got this one because werewolf, and I don't have plans to get more, but it's fun to have such a strange little piece in the collection.

This entry was posted in Hasbro and tagged Kre-O. Bookmark the permalink.