Oh Toys R Us... no one knows how to get into my wallet like you. 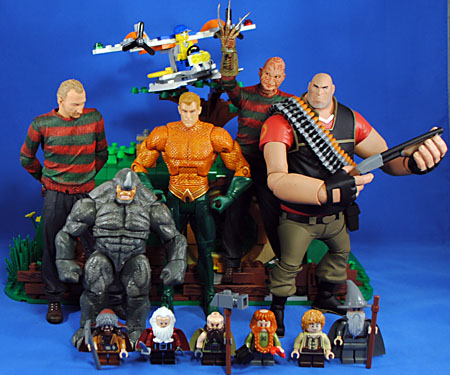 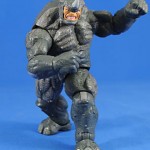 I love me some Rhino! I have no reasoning behind my draw to this character beyond the simple fact that he looks so cool. I was relatively certain I'd never see this figure so imagine my surprise when Target had one for me! He's a great new sculpt (I'm very much looking forward to the Hulk characters coming up that share this body) with pretty solid paint, though unsurprisingly the joints don't hold the paint well at all. On the downside his head is so thick as is the ball-and-socket that he essentially just has a swivel neck but on the upside he has KILLER rocker ankles that all for this awesome charging pose! If only I could get the awesome neck joint from the previous 4" figure in the Spider-Man line on this figure we'd have a perfect Rhino toy! I just can't rave enough about the ankles - they have a seemingly unending range which helps compensate for any shortcomings in the rest of the leg articulation and really open up the possibilities. Like you need me to tell you, but if you can find this guy - get him! 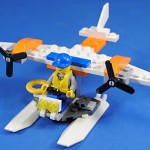 The latest Toys R Us exclusive polybag is a pretty cool one. Not only is from the increasingly appealing-to-me Coast Guard sub-theme it's probably the biggest vehicle from a polybag yet released! I mean, come one, it's got a 5½" wing span! Plus is looks fairly neat with the two propellers and pseudo pontoons. I am really digging the white/orange/blue color scheme of the theme and it carries over nicely here (though a bit heavy on the white). Under the life vest the mini-fig has a nice, new torso print as well. I also very much appreciate that this is a plausible vehicle and that could likely work right along with the other sets. So often this "response vehicles" are just tiny and hokey, but this one is darn cool and darn fun!

Lego - The Hobbit: An Unexpected Gathering 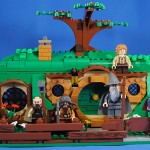 Target had knocked this down to $40 so I could no longer pass it up - it's Bag flippin' End! The model is fantastic and does a great job of capturing the essence of the famous Hobbit hole. Of course, I would have preferred the tree be much larger, but that's a solvable enough problem. I dig how well the various circular elements turned out and all of the little details, like the garden patch, bench, eaves, and so on. The interior is just as cool with tons of fun pieces, like various maps and tons of food! The exterior is really the star here, though, so that's what will live on display. Then, of course, there are the mini-figs... Bilbo, Gandalf and four Dwarves exclusive to this set (including my two favorite ones, Dwalin and Balin - and the other two most memorable ones for me, so this set is perfect!). This is a big set and a pretty fun build - I really have to commend the Lego designers of late. The sets are getting cooler and things like numbered bags and full elements in each bag is making the build process more smooth and fun. 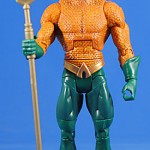 I suuuuuure do love me some Aquaman so I've been on the look out for this guy for quite a while, but apparently so has every one else but at least I finally found him (even though it was for TRU's price-gouging $20). He turned out pretty well and have been arguably the best Mattel Aquaman yet if only his head weren't locked into a slightly downward gaze. His shirt is a subtle but different enough shade of orange with goldish wash, to make him easily stand out from the other Arthurs. I also really dig that his new trident, presumably from the comics, is essentially the one from Super Powers too! All in all, this is a pretty solid not-DCUC figure, as long as you don't think about the price. 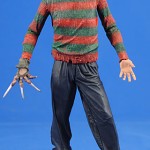 Man. A. Live. NECA... how are you nailing these likenesses so hard!? This totally puts to shame their previous Fred Krueger figure, a SDCC exclusive from Freddy vs Jason and one of my earliest reviews here. In comparison to the rest of the line this is a sadly lackluster release, with only the accessory being his re-released hat which doesn't fit very well on this head. It would have been cool if they'd retooled the sweater to be undamaged, or included the doll from the previous Fred, or something. Still though, the likeness is so astoundingly dead-on here that it's well worth the purchase just have it with the collection, not to mention a Robert Englund figure! 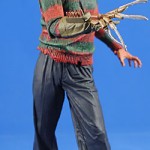 This was a tough sell. Like Fred this guy gets no accessories save for the hat, that's a real bummer considering the previous figures in the line. He does get is a new head and new right forearm. The forearm features the last significant costume change for the character - his "power glove" from Freddy's Dead. It's a great sculpt that is everything we've come to expect from modern NECA. Sadly, though, the left hand can't come anywhere near the game controls on the "power glove." Unfortunately, though, the weakest part is the new head. When you compare it to the PHENOMENAL heads in the rest of this line, it's just terrible. The expression is based on a very specific image of Freddy grinning while playing the glove but... whoever did this head just missed the mark and turned it into a total cartoon chipmunk. Honestly, I'm just shocked that NECA let this out as is, and the lack of an alternate head here is all the more felt as a result. I'd really like to see this line continue (we really, REALLY need an improved New Nightmare Freddy to complete it) but if this is what we have to look forward to, I'm not too sure what future it has. 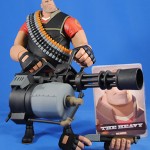 Well... despite essentially the first two figures from this line being an unending pain in my ass because they CAN NOT STAND and I just liked the look of this guy too much to walk away. He, too, is an awesome sculpt and nails the stylized look of the characters. Plus - he comes with a massive gun, and who doesn't love that!? He also gets an shotgun and two alternate hands that hold it perfectly. Like the previous figures he's overloaded with articulation, which is very welcome from the waist up but elaborate and confusing from the waist down and, OH YES, leaves him with difficulty remaining standing. If only he could stand he would be amazing.

This entry was posted in Rustin's Spoils of the Week and tagged Aquaman, LotR, Marvel Universe, Nightmare on Elm Street, Spider-Man, Valve. Bookmark the permalink.