Eric Masterson was an architect when he first met Thor, and he was 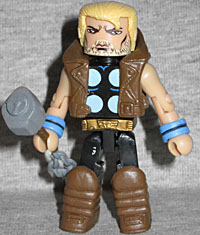 deemed worthy to lift and wield Mjolnir to protect the wounded God of Thunder. Later on, he was given his own enchanted mace, called Thunderstrike, which has many of Mjolnir's powers, and became a superhero in his own right.

Yes, the mace is called Thunderstrike and the hero is also named Thunderstrike. I can't decide if that's confusing or economical. He's still wearing a Thor shirt (the kind with discs, you know what we mean), but he has it under a leather vest. Thunderstrike hates sleeves the way Homer Simpson hates pants. He gets big, thick boots and blue wristbands (but thankfully not the single glove he wore). The hair is a new piece, so his ponytail can fit over the popped collar of his sleeveless leather vest, which is a very '90s sentence.

Originally known as the "Stone Men from Saturn," the Kronans 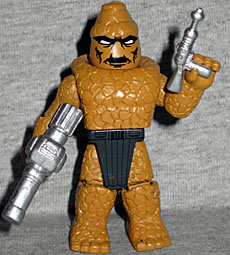 are actually from the planet Ria, in the Krona star system. Possessing rocky, orange hides, the hardened aliens once battled the mighty Thor, and the Kronan Korg later fought alongside the Hulk in the arenas of the planet Sakaar.

This figure was clearly just an excuse to reuse the extensive new tools developed for the Thing - but the Stone Men from Saturn are still mildly famous/recognizable on their own, because they were the first enemies Thor ever fought. You know the cover of Journey Into Mystery #83? They're the ones Thor's beating back with his hammer. This figure gets a new, pointier head, and new forearms/hands that have more fingers and cover more of the elbow than Thing's hands did. He also gets two new silver ray guns.

Since the Kronans make for good army-builders, there was a variant of this set available, featuring Eric Masterson as Thor instead of Thunderstrike. I chose not to get t, because I'd just reviewed the last Eric Masterson Thor Minimate when this series was solicited.