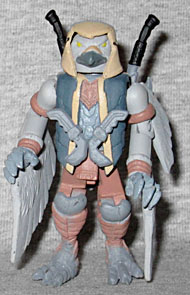 A predator from birth, Merk clashed with Vorin many times before they became allies. But Merk studies his friends as well as his opponents, and Vorin does not yet know the extent of the role Merk has played in his past.

Vorin does not yet know, and we'll probably never know unless IDW decides to do a second miniseries comic - something that seems very unlikely, right now. It's kind of a shame, too - while the book didn't read too well in individual issues, it's much better in one sitting (not that it was "written for the trade," as they say, just that the entire story happens in the span of maybe two hours, so a month-long delay between chapters hurt the momentum). 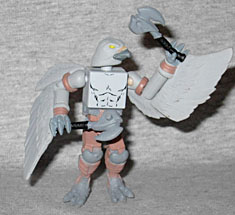 Merk is a falcon, and, as the biography suggested, one of the good guys. He has pieces similar to Vulture to create his wings - one half a ring that fits over the upper arm, one half a hand with the lower wing attached to it - though his are of course more organic than the Spider-Man villain's. He has a new head with a removable hood, new shins to create bird-like feet, and his hands look like talons. In addition to the hood, he also has a waist piece that provides his tail feathers, and a vest you can remove to show all the fine bird-ladies his chest.

Then, because Merk is something of a knife nut, he comes with four weapons: two axes that plug into his back, and two... shorter... blade... things... that plug in by his stomach. Oh wait, I get it! They're supposed to be two knives in crossed sheaths; but rather than make it as one piece, AA made it as two, so the flat edges are supposed to meet in the center and form a big X. That's an, uh, interesting idea. Doesn't quite work the way it's intended, but "A" for effort. 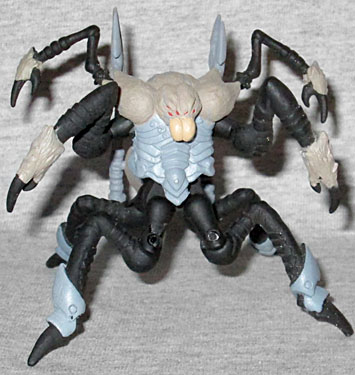 The giant spider Fenruk is second-in-command to Vachonus, and is almost as frightening. As part of Vachonus' band of bounty hunters, he pursues Vorin, Merk and Gruntos across inhospitable terrain on his eight legs.

Fenruk is a tarantula. The original tarantulas were a species of wolf spider that got their name from the Italian town Taranto. Fenruk sounds like "Fenris," the mythological wolf, so that's all fine. However, we don't have to stop there: "fenrik" (with an I) is a Norwegian military rank equivalent to second lieutenant, and Fenruk is second-in-command to Vachonus. Layers upon layers! 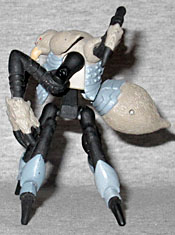 Fenruk's construction is interesting. He has a standard Minimate chest block, but a new waist piece that allows his to have four legs. The legs themselves are made from Minimate arms, at least undet the first joint, at which point they switch to new spider-legs. The round arms work better than square legs would, but the elbow-knees need to have an almost perfect grip to hold the figure up, and not all of them do. Similarly, his actual elbows (the ones in his arms) seem to be too thin for the spider-arms that attach to them, so those joints either flop loosely or fall apart. I ended up gluing them in place. He gets a giant chest cap that provides armor, fur on the shoulders, space for two more mini-arms, a tiny head, and a big 'ol butt.

All of which raises a question we've asked before: what, exactly, is the benefit of creating these as "Minimates" toys, when so little of the figure is related to that standard body? The cachet of the name? Experience with the manufacturing process? What?

Fenruk is armed with two wicked-looking halberd things that can combine into one long staff, much like Strictus' weapon. The pieces can plug into the sides of his abdomen when separated.

In order to make back some of the money being spent on all these new molds, the Battle Beasts had TRU-exclusive repaints, half of them representing different characters. TRU Merk is done in brighter, more comicbook-y tones, while the TRU tarantula, Spidron, is black and orange with gold armor.

The biggest shock of this year's Toy Fair had to be the announcement that Battle Beasts was getting a Series 2. A lot of the other "surprises" we could have predicted, but that one? Caught everyone off guard. It's good we'll be seeing more of the line, but hopefully we won't see a repeat of the problems Fenruk has.