Do you notice anything odd about the main picture in today's Xanatos (w/ Steel Clan Battle Armor) review? 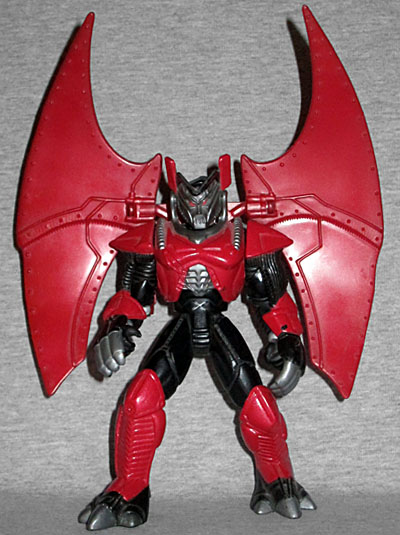 Look at the wings. They seem to be upside down, don't they? The large points should be at the bottom, and the scalloped edge at the top. That's what the Gargoyles' wings look like, and that's what the suit should look like, too. So why don't we put the wings on this way? Take a look: 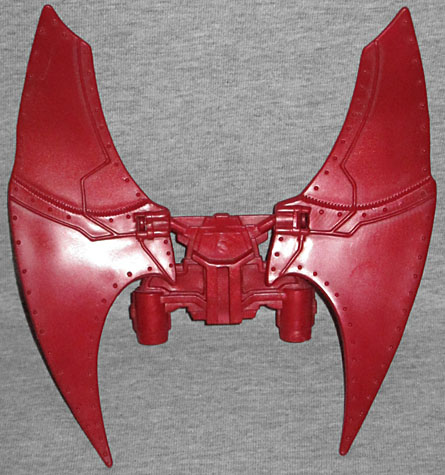 That looks better, doesn't it? But do you see how the small spikes 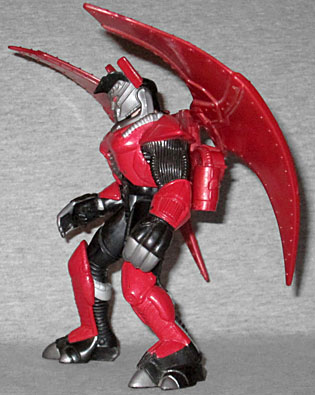 on the (now) underside of the wing overlap with the backpack? Yeah, that's a problem. Because of those, you can't have the wings be straight up and down in this configuration, which means you either have to position the wingtips in front of or behind the jetpack.

You can't put them in front, because then they get in the way of the arms. And if you put them behind, the wings end up leaning forward over the figure, to the point where they're almost parallel to the ground. See the picture on the right? That's as "straight" as the wings can be in this position. Not very good, right? So your choices are to either have wings that lay way too flat, or look like they're upside down. Aesthetics, or function: which matters more?

Thanks to reader TheRonyn for asking about the wings, and prompting this addendum...

@OAFE Hey Yo... in your latest Gargoyles review, the wings on the Steel Clan armor are incorrectly swapped & upside-down in the first photo.

This entry was posted in addendums, Disney, Kenner and tagged Gargoyles. Bookmark the permalink.