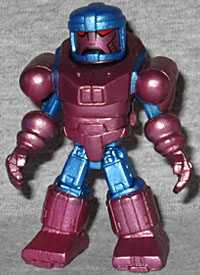 Sentinels are robotic mutant hunters developed by Bolivar Trask, a scientist who felt that mutants were becoming a threat to mankind. Not possessing their own artificial intelligence, they blindly follow their anti-mutant programming, but can be programmed to fight any opponent.

Sentinels in Capcom's fighting games have always had a unique design, and this this Minimate keeps it alive. There are many new pieces: boots, thighs, gloves, a massive angular chest cap, and a rounded hat. He's done in metallic purple and blue, which has been the default colorscheme ever since 1994's X-Men: Children of the Atom. Technically the triangles on his shoulders should be red, but that's a minor thing. 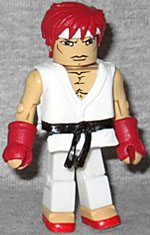 Ryu gained great recognition among martial artists after he defeated the Muay Thai king in a fight. However, instead of claiming his fame, Ryu wandered the globe, hoping to become a true martial artist. He continues his journey, engaging in battles with fighters he meets along the way.

Neat! This Ryu is based on his appearance in the original Street Fighter game, where he had red hair and wore tiny slippers! The rest of the details remained unchanged when Street Fighter II came out - a white gi, a black belt, red gloves, a headband - but the hair and feet are definitely what mark this as a "first appearance" version. 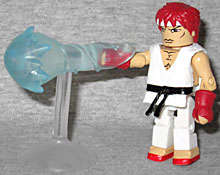 Ryu comes with the same energy blast that was created for Art Asylum's first crack at the SFII license, but there's been a change: they added a hole on one side. That may not sound like much, but add one of the "single stem" hover stands (included with the set, naturally), and now the shoryuken hadoken fireball can actually point straight out instead of drooping to the floor.