Well... it looks like this Hot Wheels thing might be getting a little more substantive for me. As much as the scalpers and store-opening collectors (viewed as collectible competitors in my youth) have given the line a negative connotation in mind, these cars or licensed properties are turning out well enough and are remarkably affordable that when and if I can ever find things I'm after, I just gotta get them. I wonder if there is a figure version of this that could be done... At any rate thanks to some uncharacteristically good luck this week we're looking at about a 50/50 split between Hot Wheels and real toys (burn). 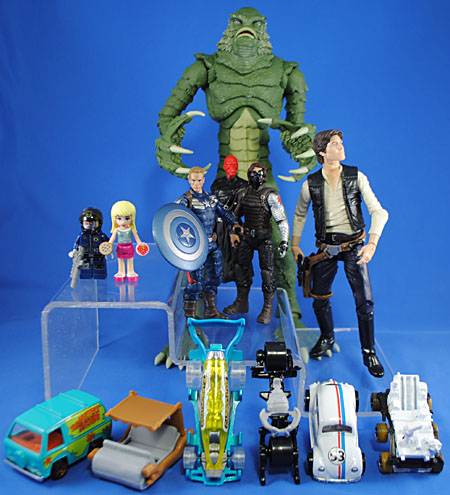 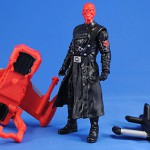 This is a welcome figure that rights the wrongs of the concept-art-based figure from the first film. It is, of course, not nearly as articulated as that version but it still has enough to keep things squarely in the positive column. Really the only thing missing is wrist joints, but I'll survive because this is a screen-accurate Red Skull! It even has a great likeness being unmistakably Hugo Weaving in the makeup/CG despite some exaggerated proportions. In lieu of accessories he gets a laughably over-sized backpack that launches a little drone plane. It's actually the best kid-targeted pack-in they've done in a while as thought did go into (it can be a vehicle or ground-based launcher too) and the drone not only looks neat (but very GI Joe-y) it fires pretty far. 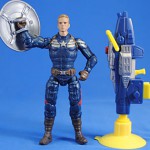 Apparently some folks are none too crazy about this costume but frankly I love it. The "Commander of SHIELD" look has always played well for me and I think this "stealth" suit is an awesome merger between movie-Cap and it. The figure turned out pretty darn well. The details are a little soft but still look good and the paint is relatively crisp. He comes with a useless suction-cupped missile launcher and also includes his signature shield in the new "no red" colors. It has two loops for his to hold and no peg, despite there being a peghole on his back. He gets the now-standard articulation since The Avengers which is good but frustrating since it lacks wrist and ankle joints. My only real issue with the figure is the head. While I'm happy to finally get an unmasked Rogers figure whoever that is it certainly ain't Chris Evans. 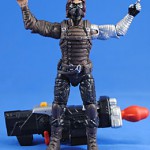 Isn't funny how The Winter Soldier gets subtitle-billing but is such a minor part of the marketing? Like he's an afterthought in his own film (kind of like how they have and are saying Electro is the main villain of Amazing Spider-Man 2 though they're marketing as Harry Osbourne/Goblin being the threat)... weird. At any rate I had to get this since... you know... he's in the movie and everything. I was quite surprised, though, that once I had him hand I really started to like him. I have zero affection for The Winter Soldier character/concept but this design for him really works. He gets the same, moderate articulation and minimal but good paint as the other two figures. Also, in stead of his signature sniper rifle or guns of any kind he gets a as-boring-as-possible gigantic missile launcher for all those "precision strikes" he is supposedly up to. Like Cap I presume will be getting a re-issue with an unmasked head (though I much prefer this one) so hopefully that will get a rifle. Until then I'll just have to raid the GI Joe accessories. 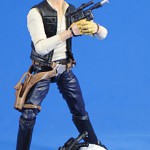 The good-enoughs keep on rolling with this second series figure. He'll probably be the last of that series I'll get since I'm not really convinced Boba Fett even exists at this point. I finally found Han and thus... here he is. He's less than great but more than okay. The chest paint misses the lines a little bit which is annoying. The likeness is "good enough" for me since it's on the better end of the spectrum for Han Solo toys. I love that he comes with the gloved hands, but they also annoy the hell out of me as I associate those almost exclusively with the "don't get cocky, kid" scene which means he should have his damn headset on. Likewise, I really appreciate the inclusion of the Stormtrooper belt and blaster, but again I associate that with them running down the hallway which means he should have a "yelling" head. Aaaaaaanyways, as far as this guy goes... it's Han, he's cool! Aside from the obvious and INCREASINGLY AGGRAVATING lack of double-hinged elbows my biggest issue with the figure as is are the gun holsters. On both belts the cut-outs on the sides are a couple millimeters too shallow and thus neither blaster fits snuggly in. 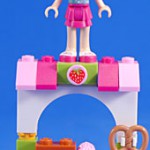 Another simple Friends polybag, again reminding us that all girls can do is sell food, this little set comes to us via Target at an oddly higher-than-normal $5.59 pricepoint. We get our usual potpourri of white, pink, light-maroon and lime-green bricks that are of little excitement. The build is simple but not as simple as it could be, so that's nice. There is, of course, a Stephanie mini-doll in what seems to be a new outfit. The real draw here, though, is the food! In addition to a pretzel we get two of the new 1x1 spirals in pink to create cupcakes but most special are the flat 1x1 rounds with new prints! There are two with strawberries which are neat, but somewhat odd (are they strawberries? Cookies? Paintings?), and two cookies. I am utterly and disproportionately excited about the cookies! 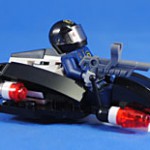 This sucker has been really hard to find but finally my local store got in a bunch so I stocked the hell up! Much like the TMNT Kraang polybag this is a perfect polybag! (1) Battle Builder, (2) Cool Build, (3) Excellent Parts! I really, really, really like the look of this little speeder which is also painfully swooshable. There's a lot of nice little bricks here including two of the 2-part hinges and some rare things like translucent gray cones and black-base levers. It comes with a robot cop wearing a helmet that sports a print on the forehead (!) and one of their new guns, too. It is, in every way, awesome!!! I got four and am thinking I probably should have gotten more. 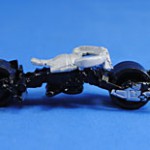 I was very surprised and very pleased to find this at my local grocery store! I've never been able to pay the $8+ premium price for the bat-pod in the "premiere" Hot Wheels Batman line (or whatever you want to call it) so it's been a hole for me. As such I debated for several days about opening this or not since I've kept that collection carded, but as you can tell... opened won out. This is actually an excellent toy of the not-bat-cycle. The whole body is die-cast metal, including the silver gas tank and handles! The wheels are plastic and their wide, over-sized design allows for perfect stability. If you can find this it is 1,000,000% worth the dollar. 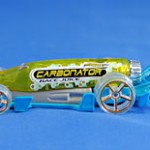 I've been hunting for this guy for about a month. Why? Much like the Fig Rig it has practical functionality! The spoiler is a bottle opener and the little tab under the front of the "bottle" helps pull-up can tabs. Neither is particularly stellar at their job, unfortunately. Bottles require a second "pop" to get the caps off and the front levers up a can tab enough to break the seal but not really open the hole. Still though, I quite like the functionality of it and the cool, bright colors. This has been released many times before, apparently, and there are even Coke and Pepsi branded versions I'd kill for! 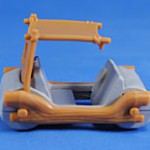 I managed to swing by a Target at the perfect time apparently because they actually had some pretty cool stuff, so screw you Hot Wheels scalpers - make room for the casual fans, you bastards! For a dollar (actually $0.87 due to a sale) how could I not get this!? It's simple with minimal paint but its the gosh-darn Flintstones car! The gray parts are die-cast covered in a thick, flat gray while the rest is brown plastic. There are two plastic wheels in each to the "rock cylinders" allowing this guy to roll about. It's fairly cute and fun. 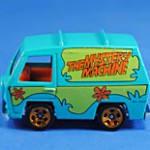 BOOM! I am surprisingly jazzed about getting this for a guy not that into Scooby Doo. It's about as iconic as you can get for cartoon vehicles so I love having it with the Flintmobile (man, I have to find the Jetsons' car now) and/or with that great Scooby figure 10-pack. The paint is relatively clean, the colors are bright and cartoonish and the sculpt is likewise exaggerated. Odds are real people will never see this because it's shortpacked and a prime target for the scalpers so I am very thankful to have spotted it. If Hot Wheels packed these types of things in higher volume I think they could do even more business than they already get. 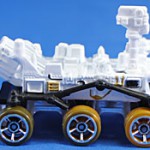 Another great example how cool Hot Wheels can be. The white is gloss paint on die-cast metal while the rest is plastic, including the turn-able tower/arm. The wheels are a neat light brown/black swirl of colored plastic so no two are alike. The body gets some nice gold, silver and black detailing on the side wires and there's even a NASA logo printed on the front of the clear plastic chassis. This makes me wish they'd re-release the other various NASA toys they've no doubt done before. A Moon Rover or Apollo Capsule would be particularly cool! 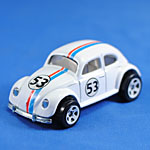 It's Herbie! For some reason it's labelled as a generic "Volkswagen Beetle" but there can be no doubt this is Disney's beloved living car. Target had three or four of this guy and all of them had various paint defects, so... that kind of sucks. I'm not particularly partial to Herbie but for a dollar it's a cheap, fun thing to have in the collection so ultimately I'm pleased to have it. 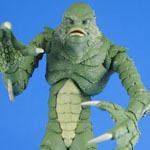 When's it's "on" I really dig Mezco's stylized aesthetic (like Dark Carnival, Gangsters Inc or Hellboy), though I have to say I was not very impressed by the final product so the $30 pricetag kept me at bay. The sculpt is very good, but the paint has a sort of a thick or "chalky" look to it. The figure is cast in olive green then covered in a thick, flat paint of the same hue. The light green on the fins is just sprayed on and thus rarely goes flush to the body. However, I ended up liking this quite much more than expected - why? Articulation. It's minimal but has more range than you'd expect thus allowing for some decent pose options, including a pretty decent swimming pose. The ankles seem to be generally holding up well with minimal tipping, but rather than hiding the waist under the incredibly convenient scales/plates they just cut arbitrarily across the sculpt. It's also a little odd that this guy is injection molded when all their previous figures in this style were rotocast. He turned out so well ultimately I'm even pissed that I couldn't get one of the SDCC exclusives, but the paint is so rough that it's hard to really recommend, particularly at the relatively high price.