Cloned from a damaged Wolverine gene sample, X-23 was created for one reason: to be the perfect killing machine. She now seeks to turn her life around, 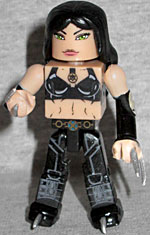 but her extensive training as a top-secret operative has made her a master of multiple forms of martial arts, and she possesses two claws in each hand and one in each foot.

This X-23 is better than the previous version, which is surprising - you'd expect these (at least the Marvel half of them) to be throwaway junkers, but she's got better hair, more complex paint masks, and, answering our complaint about the last toy, new feet with her claw popped out and sculpted straps over the top! Wow! She uses the same claw hands, but gets a new face. She's still baring her midriff, but her outfit looks more like club gear than a team uniform. The details of the boots and pants are painted in grey on the fronts and outsides of her legs, and her golden ring belt goes all the way around the waist.

The cat-girl Felicia was taken in by a gentle nun, and she now works at an orphanage to help children who shared her circumstances. Kind and cheerful, 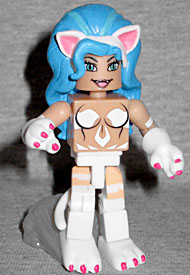 with dreams of becoming a musical star, Felicia can fight with feline abilities and razor-sharp claws, as well as transform fully into a cat.

Back in 2006, Art Asylum released a series of Street Fighter Minimates. A second series was solicited (and looked awesome), but never made it out. Felicia, the Darkstalkers catgirl, was meant to be one of those figures. Of course, this one, released six years later, is much better than the other would have been. Her add-ons are all new: hair, hands, tail and feet. If you think her costume is too revealing, don't worry, it's not: she's not wearing a costume; that's just her natural fur. She gets red paint apps for her claws, pink for her ears, and a cute, happy face. Aww! The set includes a clear version of the dust cloud base that came with Taskmaster and Rad Spencer, though that could obviously be for either character.
Next