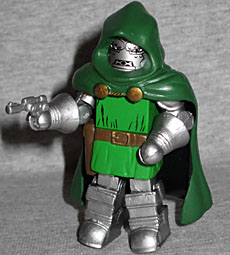 is a genius in physics, robotics, cybernetics, genetics, weapons technology, bio-chemistry, and time travel. His armor is loaded with gimmicks, and he carries a high-powered blaster in his waist holster. He is also self-taught in the mystic arts.

This is a terrific Dr. Doom! Every add-on he's got is a new piece - boots, gloves, skirt, and cape. His pistol (also a new piece) really fits in the holster on his belt, which is very cool. The boots and gloves have discs on them that line up with the figure's joints, making them look more armored than usual. His hood and cape are one piece, so it's hard to turn his head. The cape hangs over the front of his shoulders, but they still raise pretty far.

Albert Wesker is a calculating individual who will do anything to further his own gains. Having infected himself with a special virus that gives 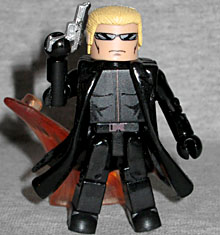 him several super-human abilities, he next plans to infect the global population with the Uroboros Virus, leaving only the chosen ones, such as himself, to create a new world.

Ah, Wesker; he's the main antagonist of the Resident Evil games, and yet we could never get a figure of him from NECA, because he was "boring." Art Asylum to the rescue! He's dressed mostly in black, including a flared trenchcoat (which goes nicely with the included trans-orange flip base, incidentally). His costume details are a mix of gloss and matte black, and his face - with his trademark glasses - looks stern and perfect. And he's armed with a black and silver pistol.
Previous | Next